“We remain what we are – political prisoners of war.” The words of 1981 hunger striker Bobby Sands are used in support of contemporary (2003) republican prisoners. Long Kesh is on the left, Maghaberry is on the right. Iniscarn Drive, Derry.

Michael Quigley, IRA, was shot dead at age 19 by the British Army during a riot in Creggan, Derry, in 1972, near the spot of this memorial plaque in Central Drive. 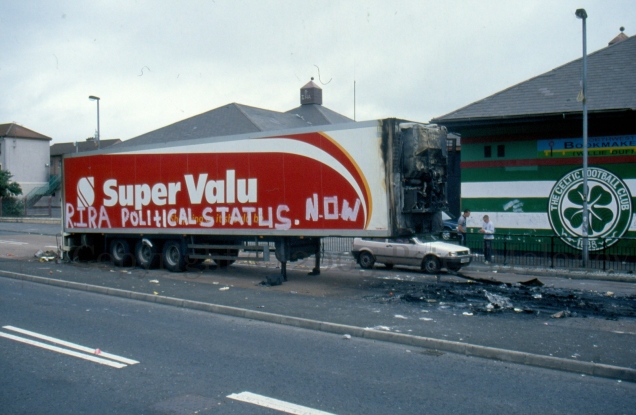 Republican graffiti on the side of a burnt-out Super Valu lorry container. Lecky Road, Derry 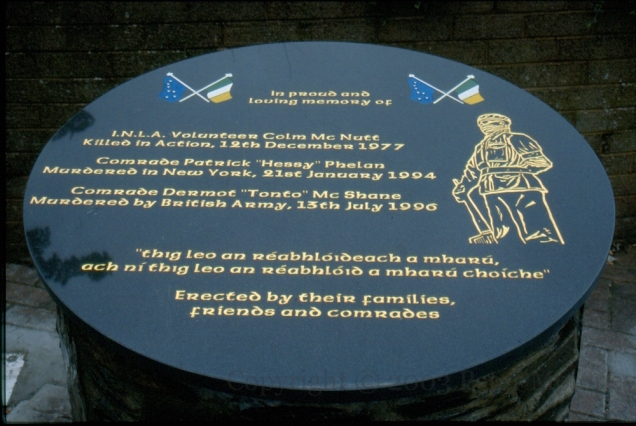 Three INLA volunteers are commemorated on this Rossville Street, Derry, plaque. 18 year-old Colm McNutt was shot by an undercover SAS officer during a botched hijacking, tipped off by best friend and informer Raymond Gilmour (Irish News). A drunken Phelan was shot by an off-duty NYPD officer in New York, nine years after leaving the country (LA Times | NY Times). McShane was run over and crushed by a British APC during riots against the treatment of Catholics during the Drumcree standoff (RN). “Thig leo an réabhlóideach a mharú, ach ní thig leo an réabhlóid a mharú choíche.” (They can kill the revolutionary …) 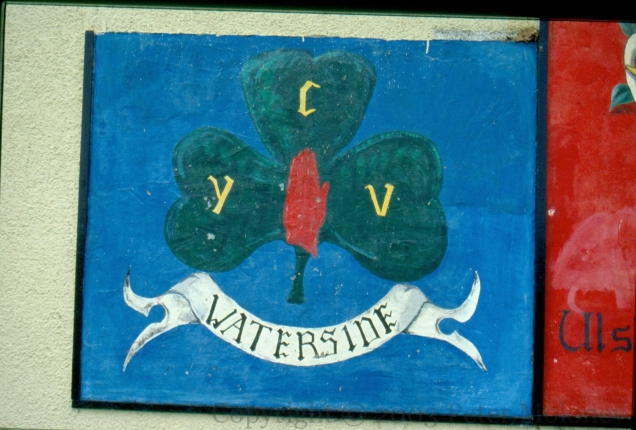 Here are 2003 images, including close-ups, of the YCV-UVF-RHC board in Dennet Gardens, Londonderry, previously seen in 1998.

December 2017 saw the 45th anniversary of the attack by loyalist gunmen on Annie’s Bar in the Top Of The Hill area of the Waterside (Derry Journal). Four Catholics and a Protestant were killed. “In memory of Charles Moore, Frank McCarron, Michael McGinley, Bernard Kelly, Charles McCafferty who were killed in Annie’s Bar on the 20th December 1972.” Strabane Old Road, Derry

This image has “Brits out” and “Fuck the queen” graffiti but more interesting is “No INLA”, which was then replaced by “IRA” in tricolours. Fountain Hill, Derry

After three and a half months, from April 18th to July 30th, 1689, the Siege of Derry ended when two ships, the Mountjoy (shown here) and the Phoenix, broke through a timber boom that had been placed across the Foyle. Approximately half of the population of the city had died. Roulston Avenue, Londonderry.