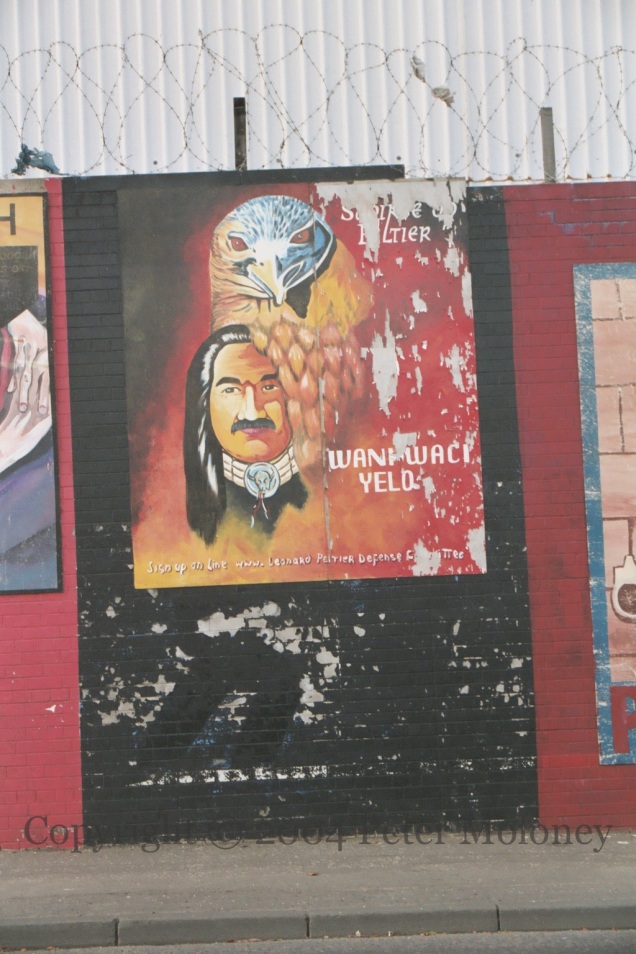 The 2002 Leonard Peltier board is not in great shape. Divis Street, Belfast 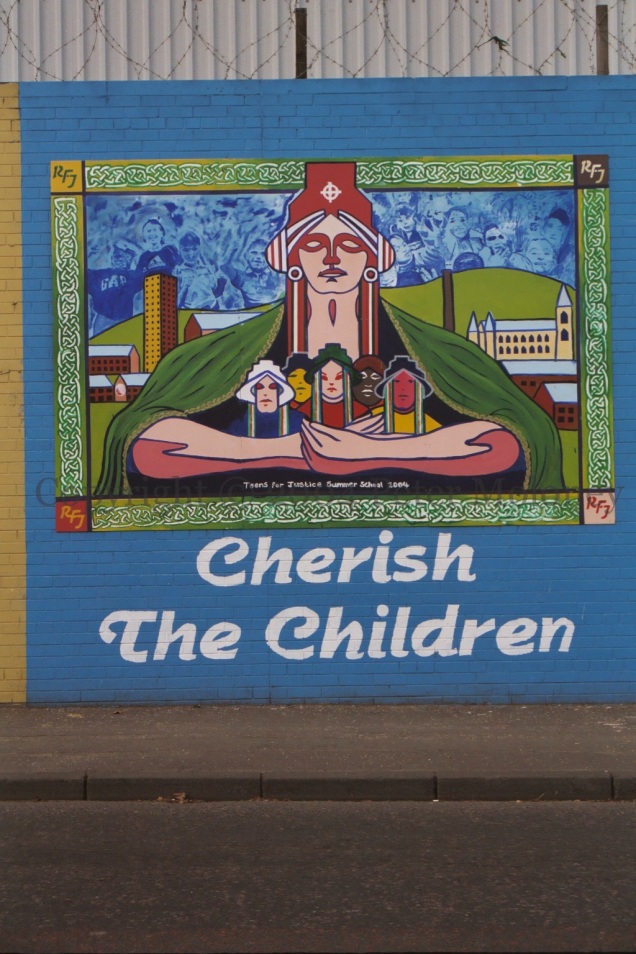 Ériu cherishes the children of all races. “Teens for justice Sumer School 2004” “Relatives for justice”. Clonard and Divis are portrayed in the background. Divis Street, Belfast 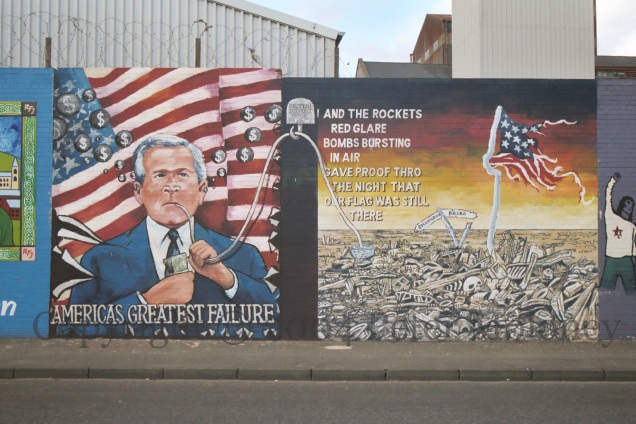 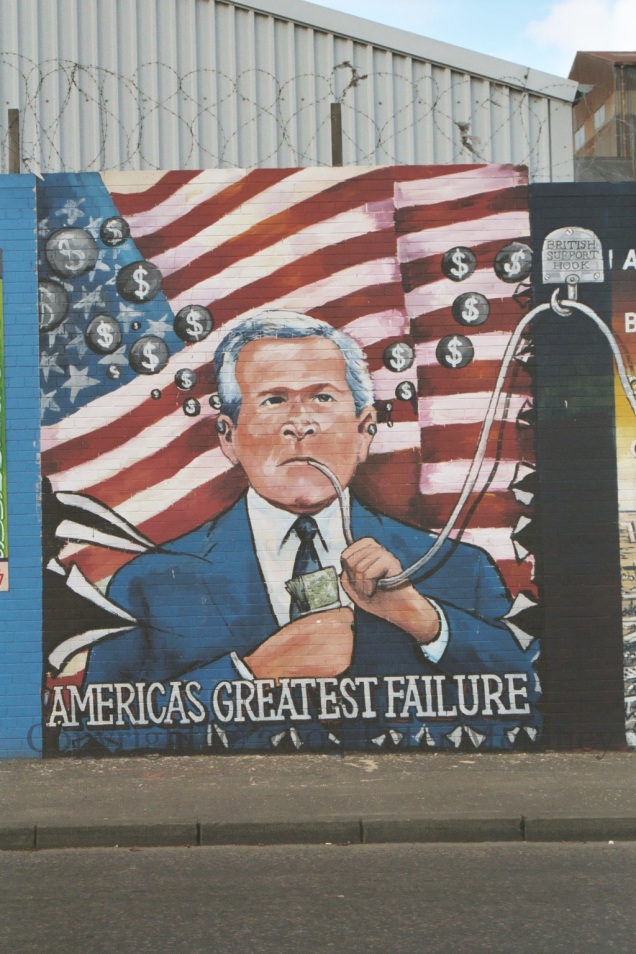 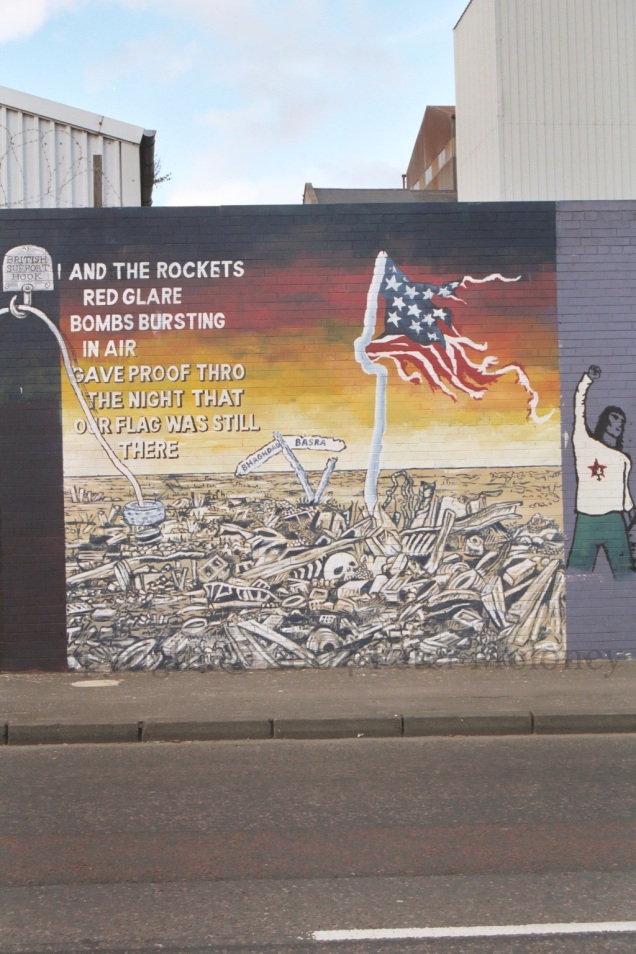 This is a three-part mural condemning the US invasion of Iraq. On the left, President George W Bush is sucking on a tube of oil while pocketing a fistful of dollars, while oily bubbles with dollar signs float out of his ears. In the middle, a “British support hook” belittles the role of the UK in the “coalition of the willing”. And on the right, a Vietnam-era poster is repurposed for the current situation: a tattered stars and stripes is still flying, over a scene of death and mass destruction. The invasion began on March 20th, 2003; US troops did not leave until 2011. Divis Street, Belfast. 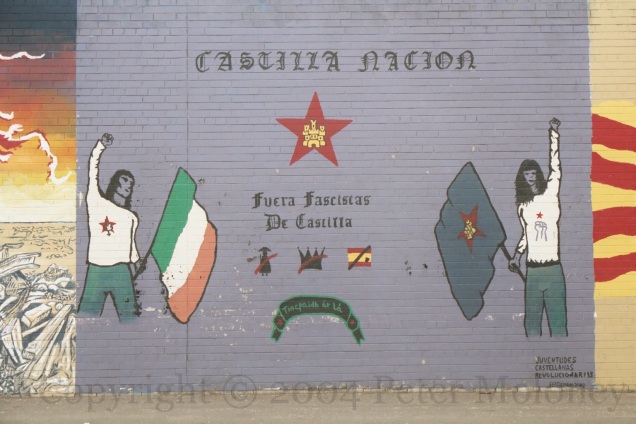 “Fuera fascistas de Castilla” (Out fascists of Castile!) The protester on the right is waving the flag of the Castilian Left, a political party working for recognition of the Castle region of Spain, roughly the north-central portion of the country, including Madrid (WP). Divis Street, Belfast. Signed and dated “Juventades Castellanas Revolucionarias – Septiembre 2003”. 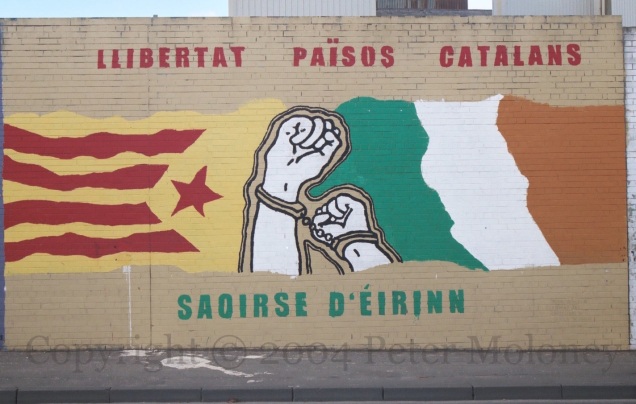 Freedom for the Catalan Countries, Freedom for Ireland (Saoirse d’Éirinn). The ‘Catalan Countries’ include (in Spain) Catalonia, parts of Valencia, and the Balearic islands, Andorra, and (in France) the Roussillon region. Divis Street, Belfast. For a similar pairing (llibertat-saoirse) with portraits of international heroes, see Llibertat. 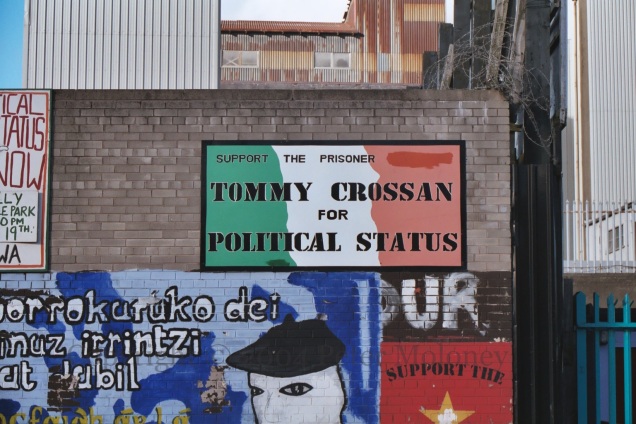 The word “candidate” has been blanked out from this Tommy Crossan board in Divis Street, Belfast, perhaps because he urged voters to spoil their votes rather than actually voting for him or anyone else in 2001, or perhaps because although he was not standing in 2004 (for the European Parliament), he still in need of support in Maghaberry, where he was serving time for conspiracy to murder. 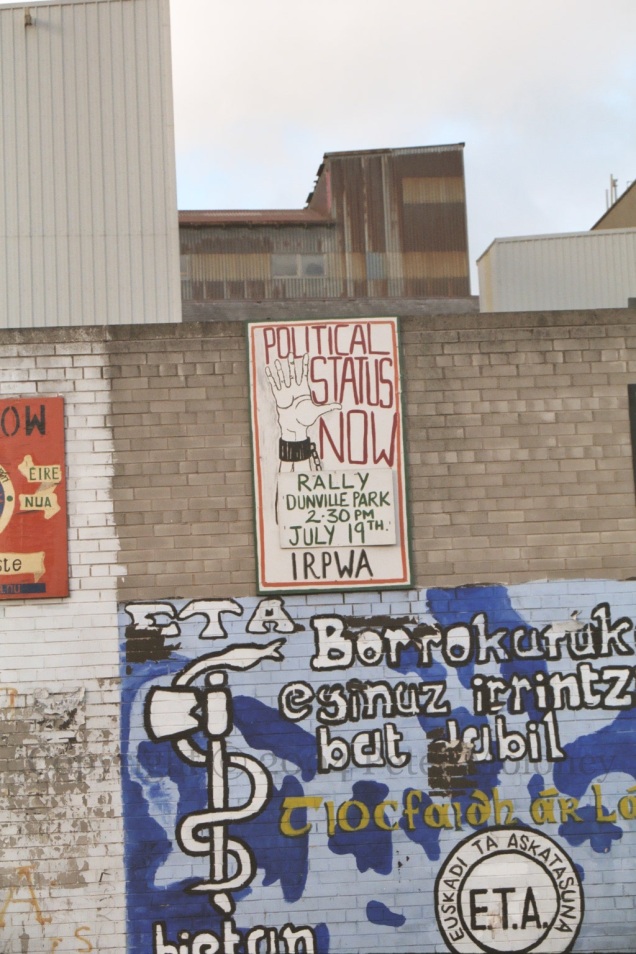 Hand-painted IRPWA board (possibly dating to 2002) on Divis street at the far right hand side of the International Wall announcing a march for political status of republican prisoner. For the Éire Nua board to the left see, Join Now and for the ETA mural below see Bietan Jarrai. Divis Street, Belfast 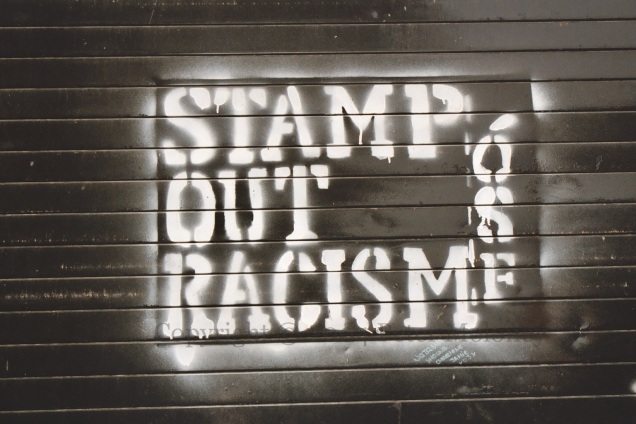 If this Falls Road, Belfast, stencil is aimed at local audiences (rather than protesting the treatment of minorities by the  state – see Institutionalised Racism) it is the first such piece in the Peter Moloney Collection. Sponsored by Ógra Shinn Féin. 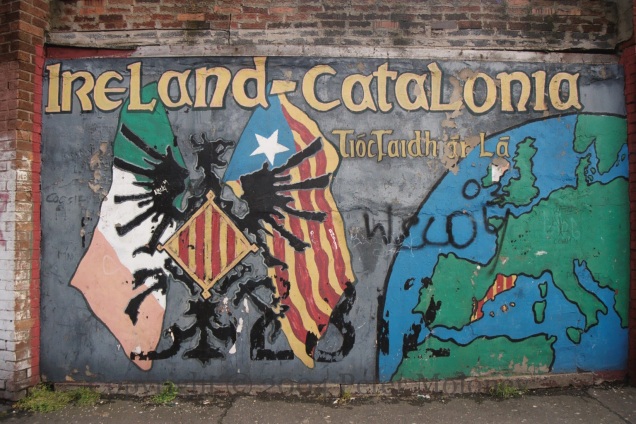 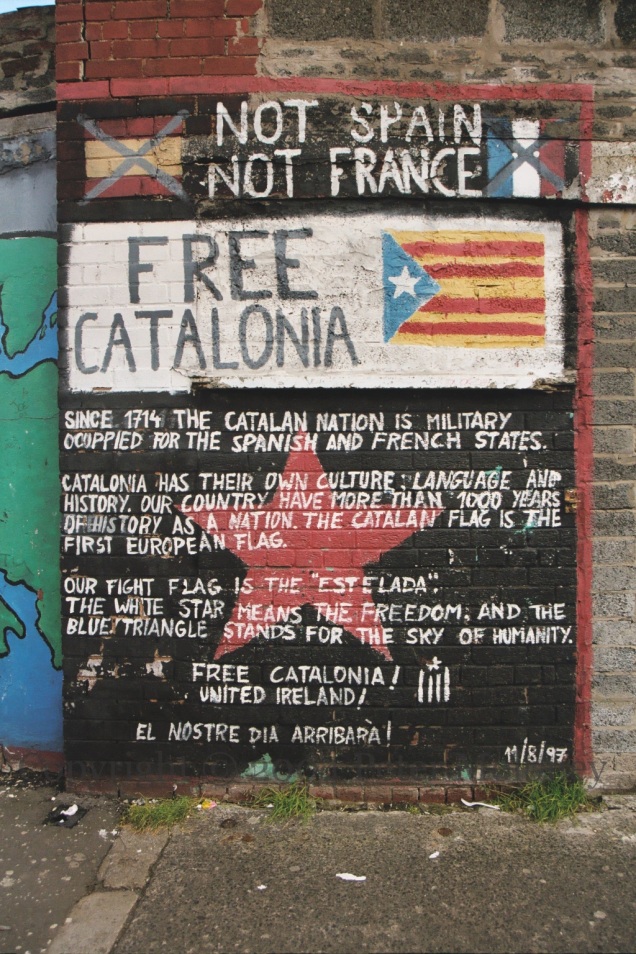 Seven years after it was originally painted in 1997, the pro-Catalan mural in Beechmount Avenue is showing its age. “Not Spain, not France. Free Catalonia. Since 1714 the Catalan nation is military [sic] occupied for the Spanish and French states. Catalonia has their own culture, language, and history. Our country have [sic] more than 1000 years of history as a nation. The Catalan flag is the first European flag. Our fight flag is the “Estalada”. The white star means the freedom, and the blue triangle stands for the sky of humanity. Free Catalonia! United Ireland! El nostre dia arribarà! Tiócfaidh [sic] ár lá. 11/8/97” 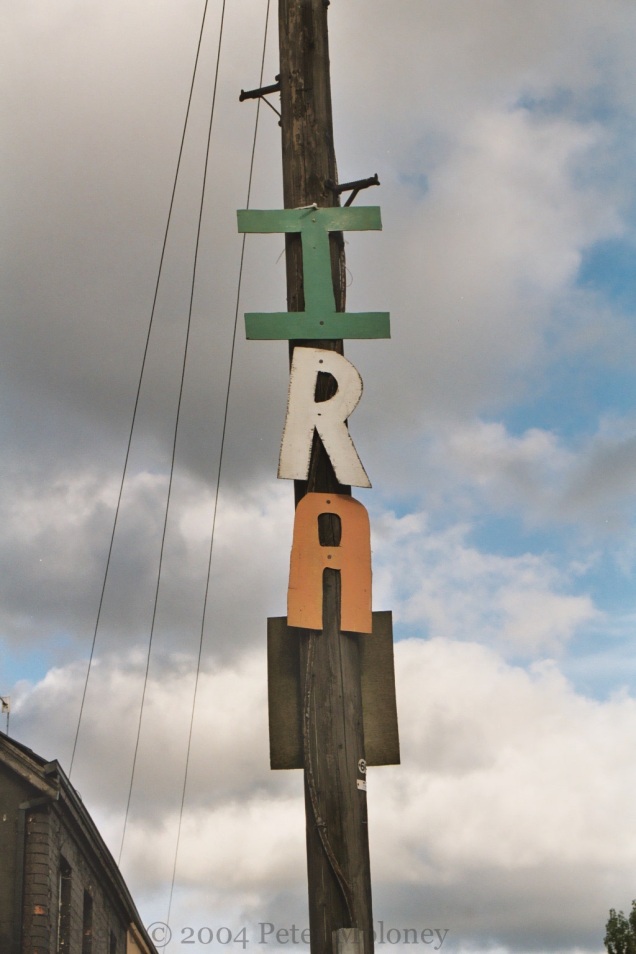