“How is freedom measured? By the effort which it costs to retain freedom!” (See also How Is Freedom Measured? and Deserted! Well – I Can Stand Alone) “Union is strength”. “There were three Home Rule crises: 1885-6, 1892-3 and 1912-14. During these periods the unionist population of Ireland opposed strongly the threat that their country may no longer be part of the United Kingdom, becoming a country in it’s own right. Unionists then as now wanted to remain British. Ulster Unionists believed that Home Rule was not the best interests of nationalist Ireland but if that was what nationalist Ireland wanted, ultimately, and albeit reluctantly, they were prepared to waive their opposition to Home Rule, subject only to the proviso that Ulster should not be subject to Dublin rule. Unionist opposition to Dublin Rule is depicted in this mural, illustrating the price they were prepared to pay for their freedom.”

According to this BBC page, the mural is rather a postcard from WWI, showing a woman exhorting Ulstermen to sign up for service in the British forces.

Fifth panel on Thorndyke Street, Belfast. With the emblem of the East Belfast Regimental Band. 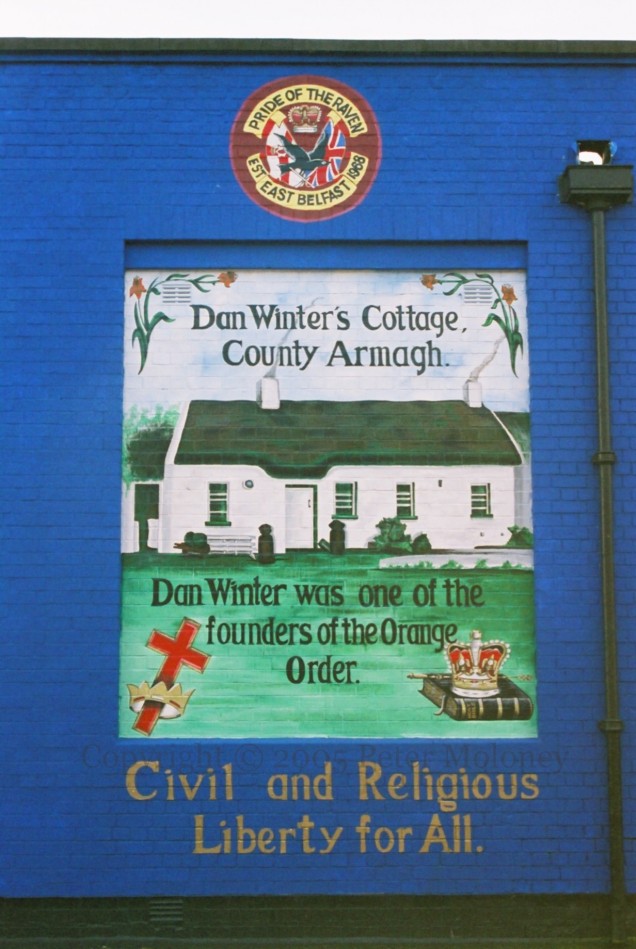 “Dan Winter’s cottage, Co Armagh. Dan Winter was one of the founders of the Orange Order.” “For many, perhaps even most, Orangemen the Order is primarily a religious organisation. As as organisation it is not anti-Roman Catholic; it is a Protestant organisation. The Orange Hall, the meeting place for Orangemen has long occupied a central place in the social life of the community. They serve as venues for a much wider range of gatherings than those, which are strictly Orange. The Orange Order is also a cultural organisation, transmitting a culture and heritage – whether it is banner painting, sustaining a great musical tradition or teachings its ritual – from one generation to the next. It also remains the most cohesive force in Ulster Protestant society and the essential expression of the culture and heritage of the Ulster Protestant people.” Fourth panel on Thorndyke Street, Belfast. With emblem of Pride of the Raven (flute band). 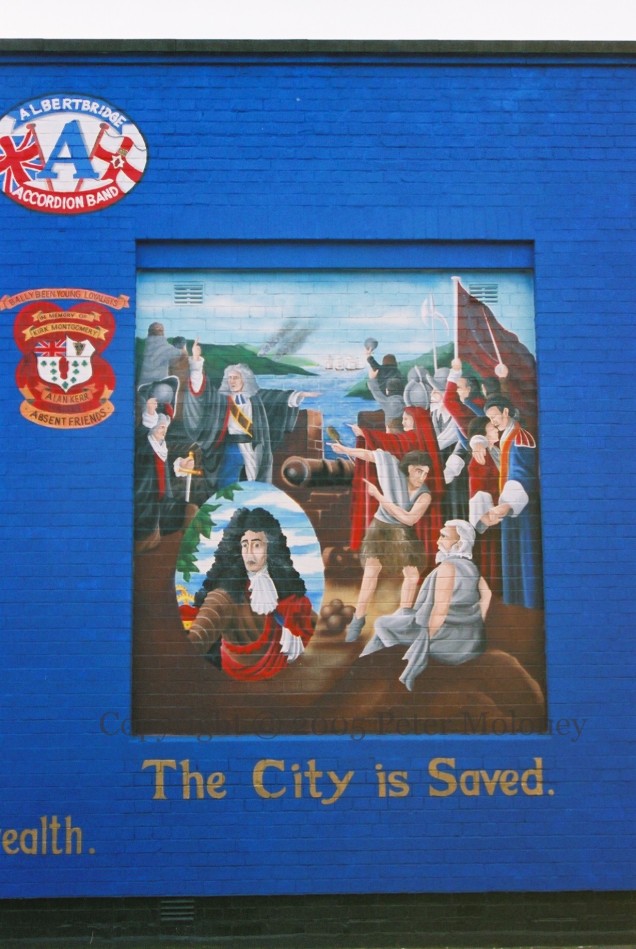 “In Londonderry on 7 December 1688 thirteen Apprentice Boys seized the initiative, closed the gates of the city and refused admittance to the Jacobite troops. This event is annually commemorated in Londonderry by the Apprentice Boys of Derry. The siege of the City did not actually begin until 18 April 1689,when James II appeared in person at Bishop’s Gate and was refused admittance. The City’s defenders greeted James with cries of ‘No surrender!’ and fired shots at him. The Jacobites were incapable of mounting an effective siege, thus, the Jacobites sought to starve the city into submission. The defenders too had to cope with severe problems. Some 37,000 people were trapped in a city whose normal population was approximately 2,000. The hard-pressed defenders were reduced to eating rats, mice and dogs fattened on human corpses. Some 15,000 people died of dysentery and malnutrition. On the 28th July 1689 three Williamite ships managed to break the boom on the Foyle and relieve the city.”

Third in a series of panels on Thorndyke Street, Belfast.

“At the closest point, only 13 miles of water separate the coasts of Ulster and Scotland. From the earliest times to the present day there has been a constant flow of people and ideas between the two coasts. Geography and history have combined to link the peoples of Scotland and Ulster closely together. Indeed, some people have viewed Ulster as an extension of Scotland. With equal logic, Scotland might be viewed as an extension of Ulster. The most important migration across the North Channel was the early 17th century Plantation of Ulster. It has proved to be one of the most politically significant mass migrations to have taken place in western Europe since medieval times but it also should be viewed as part of a well established pattern of population movement between Ulster and Scotland.” Second panel in the Thorndyke Street, Belfast, series. The “Lord Protector of the Commonwealth” is Oliver Cromwell, who put down Irish rebellion (and allied Royalists) in 1650. With emblems of Albertbridge Accordion Band and Ballybeen Young Loyalists. 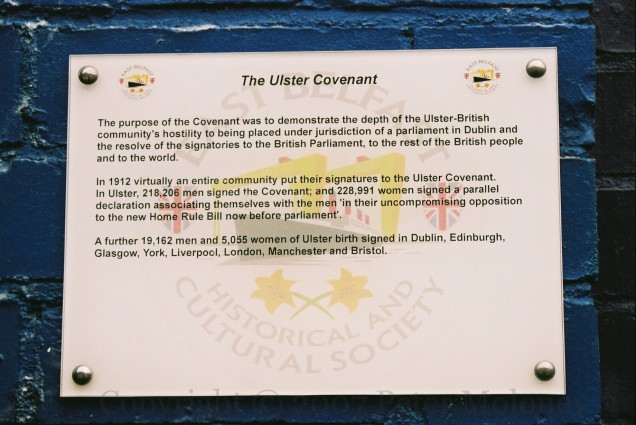 “Being convinced in our consciences that Home Rule would be disastrous to the material well-being of Ulster as well as of the whole of Ireland, subversive of our civil and religious freedom, destructive of our citizenship, and perilous to the unity of the Empire, we, whose names are underwritten, men of Ulster, loyal subjects of His Gracious Majesty King George V., humbly relying on the God whom our fathers in days of stress and trial confidently trusted, do hereby pledge ourselves in solemn Covenant, throughout this our time of threatened calamity, to stand by one another in defending, for ourselves and our children, our cherished position of equal citizenship in the United Kingdom, and in using all means which may be found necessary to defeat the present conspiracy to set up a Home Rule Parliament in Ireland. And in the event of such a Parliament being forced upon us, we further solemnly and mutually pledge ourselves to refuse to recognise its authority. In sure confidence that God will defend the right, we hereto subscribe our names. And further we individually declare that we have not already signed this covenant.” “The above was signed by me at ______ “Ulster Day”, Saturday, 28th September, 1912. God save the King.” The covenant was signed by almost half a million people in anticipation of the (third) Home Rule Bill. This is the first in a series of murals from the East Belfast Historical And Cultural Society in Thorndyke Street, Belfast. 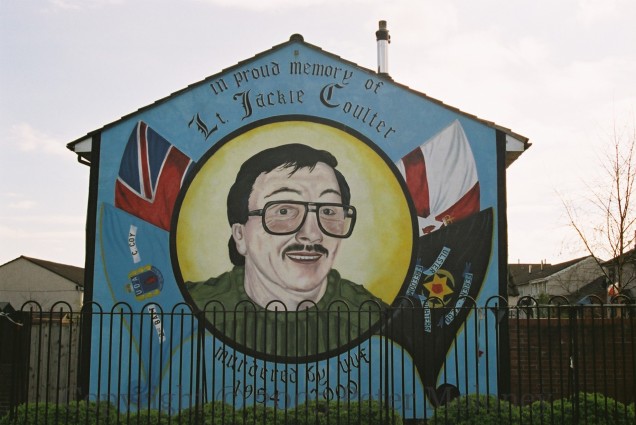 UDA lieutenant Jackie Coulter was killed, along with Bobby Mahood, as part of the UVF-UDA feud of 2000. The earliest date we have for this mural is 2001, which would mean that it was painted separately from the Johnny Adair C Coy murals of 2000 and 2002. Shankill Parade, Belfast. 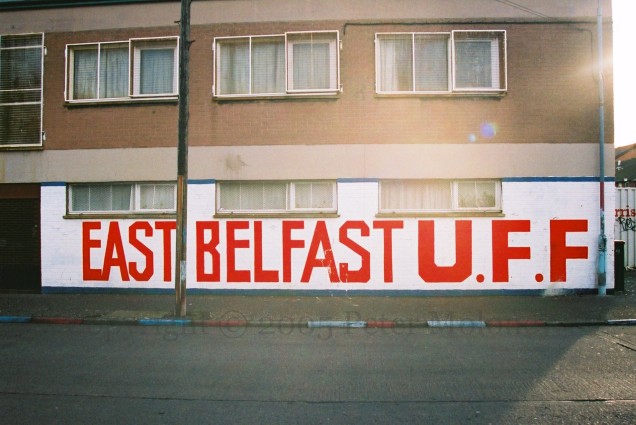 UDA territorial markings in Lord St, Belfast. The building would be demolished and replaced a few years later.

“In proud and loving memory [of] republican activists who dedicated their lives to a noble cause”. “To those who come to think and pray remember well the price they paid. Lives were given, for our country to be free, lives were taken, to keep us on our knees. From 1916 to the present day our struggle continues, our enemies the same. But we know, and they know, that one day our country will be united, Gaelic, and free.” The cross in the foreground is dedicated to Louis Scullion, an IRA volunteer from Unity Flats who was shot by the British Army in July 1972. 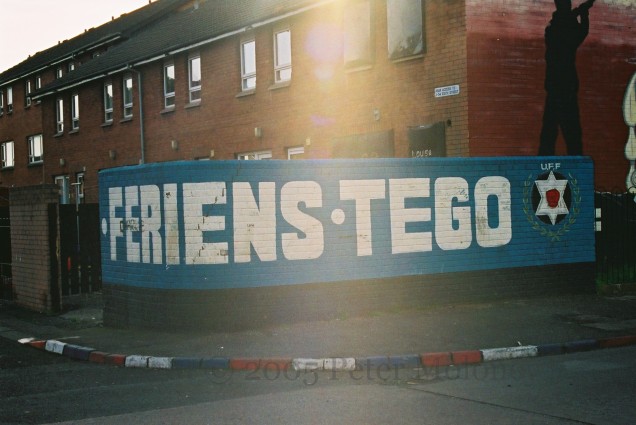 “Feriens, tego” or “Striking, I Defend” is the motto of the Ulster Freedom Fighters, the cover name used by the Ulster Defence Association, whose motto is in the main mural: “Quis separabit” or “Who will separate [us]?”. Lord Street, Belfast. 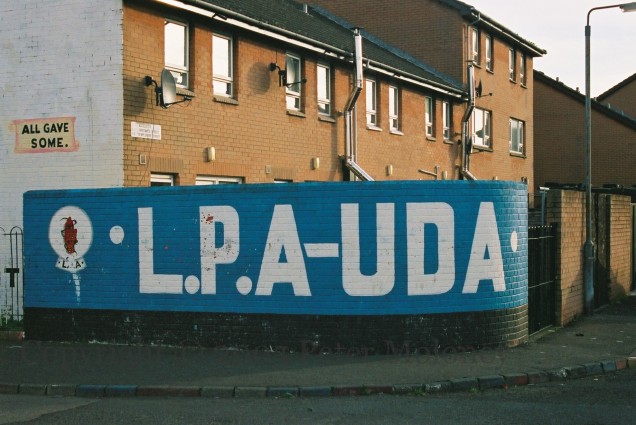 “Free our prisoners.” “LPA” is the “Loyalist Prisoners Association”. Its symbol (in the second image) is a red hand in barbed wire. In the main mural, a pair of red hands are in shackles and the fences of the Maze are superimposed on an outline of Northern Ireland filled in with the walls of the Maze/Long Kesh. Lord Street, Belfast