The Bernadette mural by the Bogside Artists is prepared for an update, ten years after originally being painted, in 1997. 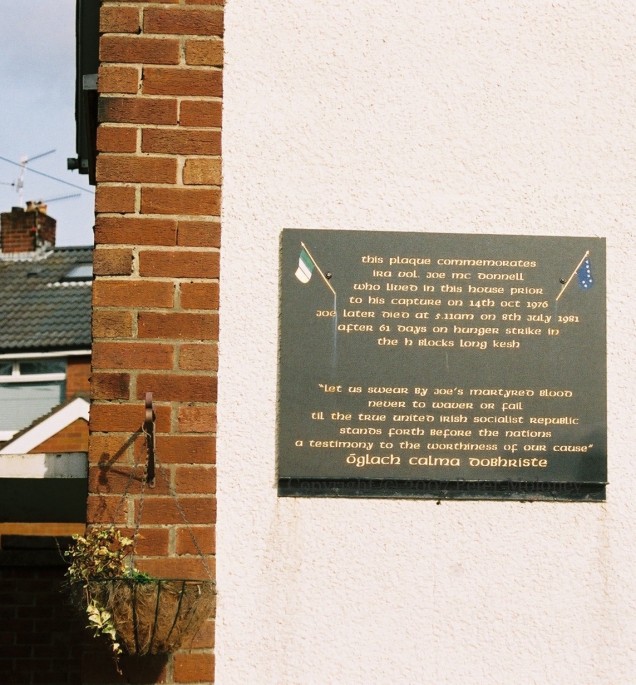 “This plaque commemorates IRA vol. Joe McDonnell who lived in this house prior to his capture on 14th Oct 1976. Joe later died at 5.11 am on 8th July 1981 after 61 days on hunger strike in the h blocks Long Kesh. ‘Let us swear by Joe’s martyred blood never to waver of fail til the true united Irish socialist republic stands forth before the nations, a testimony to the worthiness of our case.’ Óglach calma dobhirste. [A strong, unbreakable volunteer]” Lenadoon Avenue, Belfast.

“Nature sent the potato blight, government & landlords created the famine.” 1845-1849 saw one million Irish people die and a million more emigrate. During the period, the full range of other foodstuffs was produced and shipped to England, being too expensive for the native population.

“Our rulers will stop at nothing to attain their ends. They will continue to rule and rob until confronted by men who will stop at [nothing to overthrow them].” The quote is from James Connolly on Conscription. Local volunteer Joe McDonnell is portrayed between the names of the ten deceased 1981 hunger strikers. Lenadoon Avenue, Belfast. 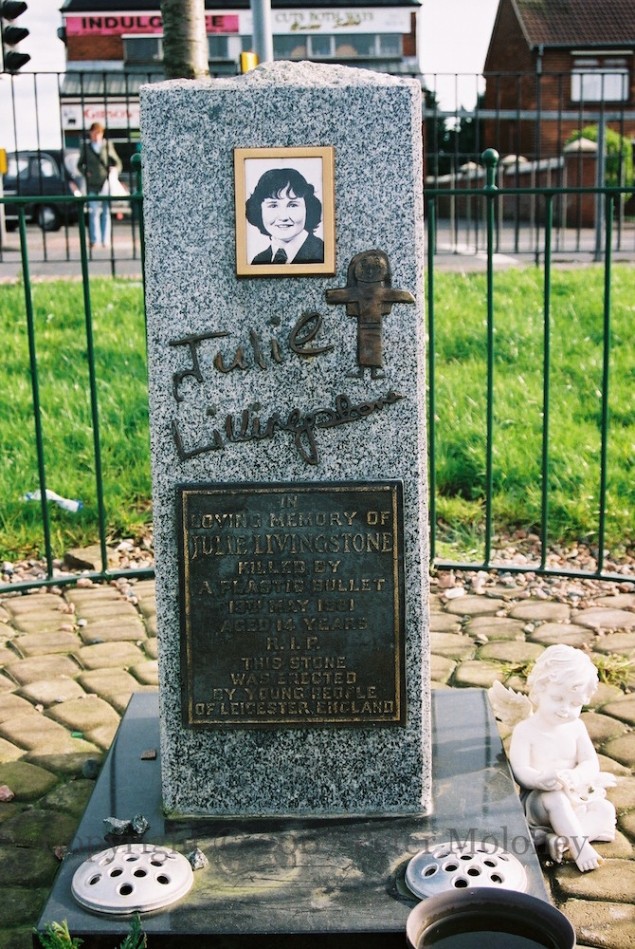 A week before Carol Ann Kelly was shot in Twinbrook, 14 year-old Julie Livingstone was also killed by a plastic bullet, on May 13th, 1981 in Lenadoon. The previous stone was also “erected by young people of Leicester, England”. Stewartstown Road, Belfast.

For the 25th anniversary of the 1981 hunger strike [stailc ocrais], a prisoner reaches for a lark (the spirit of freedom) bathed in sunbeams like a beatific vision. “Go dtreoraí cuimhne bhur níobairtí agus íobairtí denár dtírghráthóirí náisiún beo bocht chun bua.” [“May the memory of your sacrifices and the sacrifices of our patriots guide a desperate nation to victory.”] The sentence is attributed to Bobby Sands but the source is unknown – please get in touch if you can place it. Andersonstown Road, Belfast.

“I gcuimhne ar Vol. Kieran Doherty TD, [IRA] Briogáid Bhéal Feirste, 0f 54 Commedagh Drive, rugadh 16ú Deireadh Fómhair 1955, elected TD for Cavan/Monaghan 18th June 1981, a fuair bás 2ú Lúnasa 1981, after 73 days on hunger strike in the H-Blocks of Long Kesh. ‘It is not those who can inflict the most, but those who can endure the most, who will conquer in the end.’ [Terence McSwiney]” The memorial stone is in Commedagh Drive, Belfast, just west of Doherty’s home. 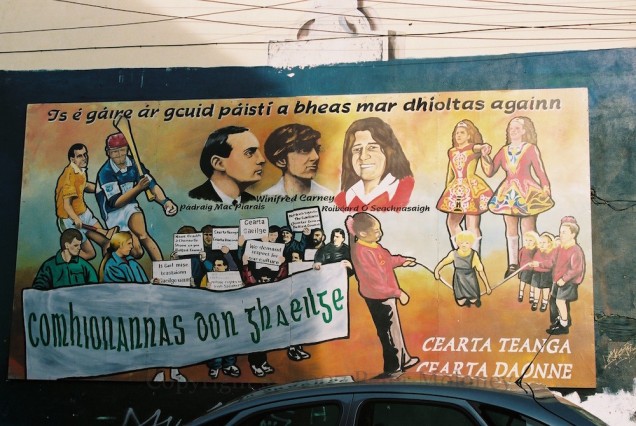 “Conway linen mill 1842-1976.” Culture NI has a brief history of the mill. It is currently in use as an arts centre and museum.

Thames Street, Belfast. Another piece for the project was hung in Beechmount Avenue. See M04431.