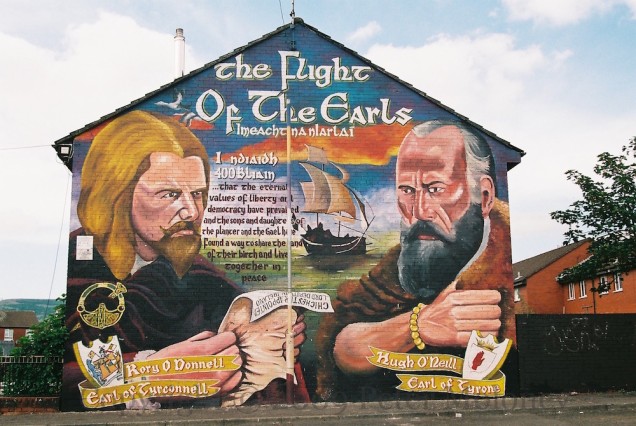 In 1607 – “400 bliain” after the Anglo-Norman invasion of Ireland – 50 years of newly-asserted English control, most recently at the hands of Charles Blount – who defeated the pair in the Nine Years’ War – and Arthur Chichester – who, as O’Donnell is shown reading, was “appointed Lord Deputy in Ireland” in 1605 – compelled Earls Hugh O’Neill of Tyrone and Rory O’Donnell of Tyrconnell to depart Ireland on a ship bound for Spain in order to petition for Spanish support in reclaiming the lands and status they were losing under English rule. They ended up in Rome instead and never returned, ending the period of Gaelic chiefs rule in Ireland and making way for the plantation of Ulster.

The pair of plaques on the left indicate that the mural was painted as part of the Re-Imaging Communities Programme’ (top) and launched by President Mary McAleese on June 19th (bottom). Even though the subject was historical, the state funding for the project required the removal of a sword from O’Neill’s right hand; he is shown instead clutching the collar of his cloak. For more on the re-imaging programme, see Visual History 10.

“Imeacht na nIarlaí. I ndiadh 400 bliain … that the eternal values of liberty and democracy have prevailed and the sons and daughters of the planter and the Gael have found a way to share the land of their birth and live together in peace.”

One thought on “The Flight Of The Earls”