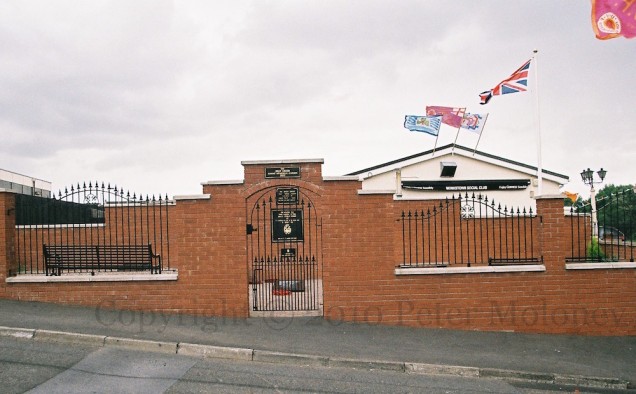 “The Billy Greer Somme memorial garden was opened by Jamesy “The Piper” Walker on the 14th December 2007. Dedicated to the fallen of the 36th (Ulster) Division at the battle of the Somme 1st July 1916. We will remember them.” Greer, East Antrim UVF commander, died in July 2006 (Mulvenna). 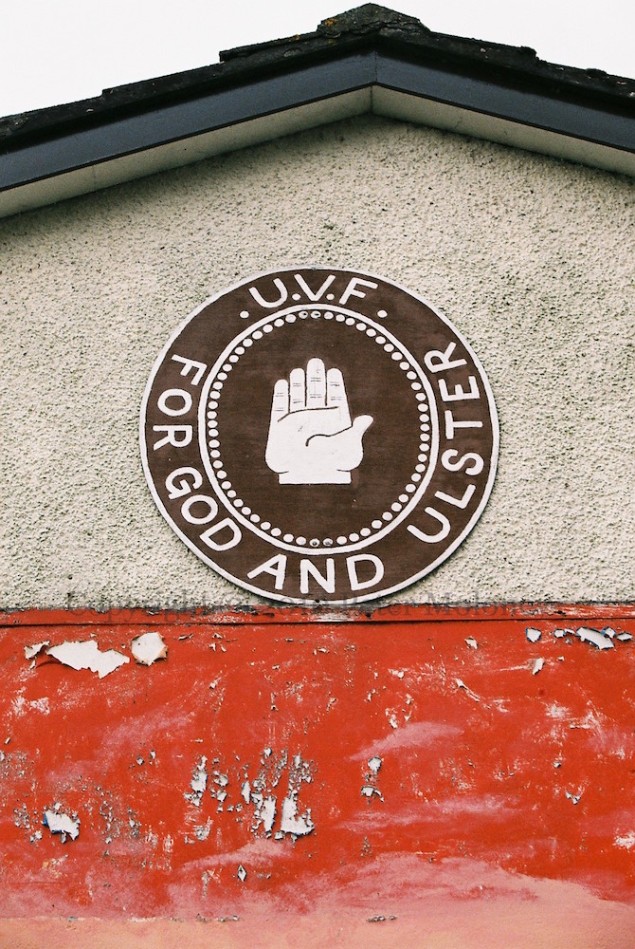 Three images from Cloyne Crescent in Monkstown, commemorating the Ulster Volunteers who fought at the Somme in 1916. 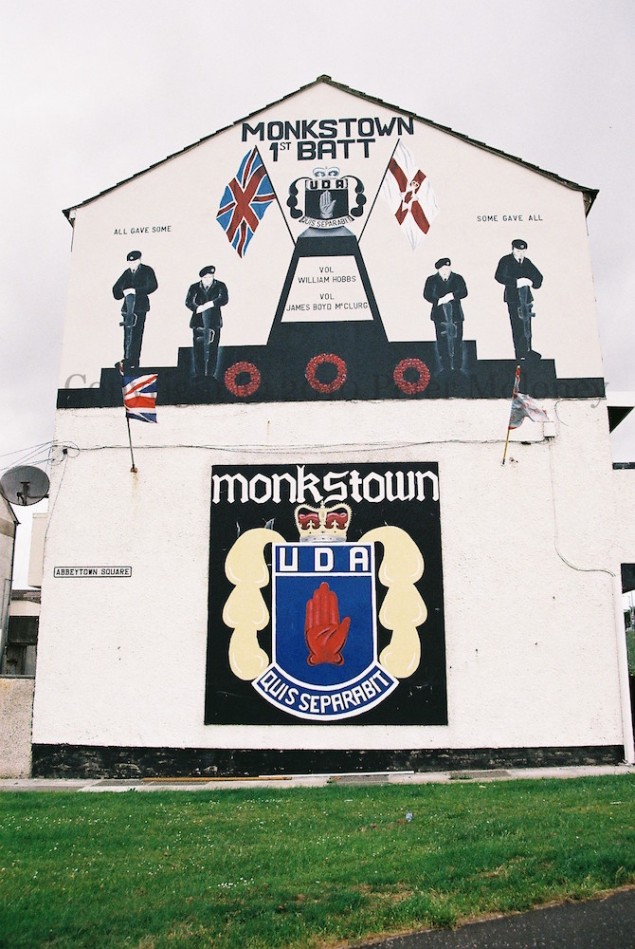 This is a new version of the Monkstown UDA 1st battalion mural on Devenish Drive. The previous showed volunteers on manoeuvres in front of Three Mile Water aqueduct in the top portion. This new mural shows graveside volunteers with assault rifles point down, mourning William Hobbs and James Boyd McClurg. The two died from a premature bomb explosion on May 10th, 1977, across the road from the mural in Seagoe Gardens; Hobbs died immediately, McClurg of his injuries a few weeks later. “All gave some, some gave all.” 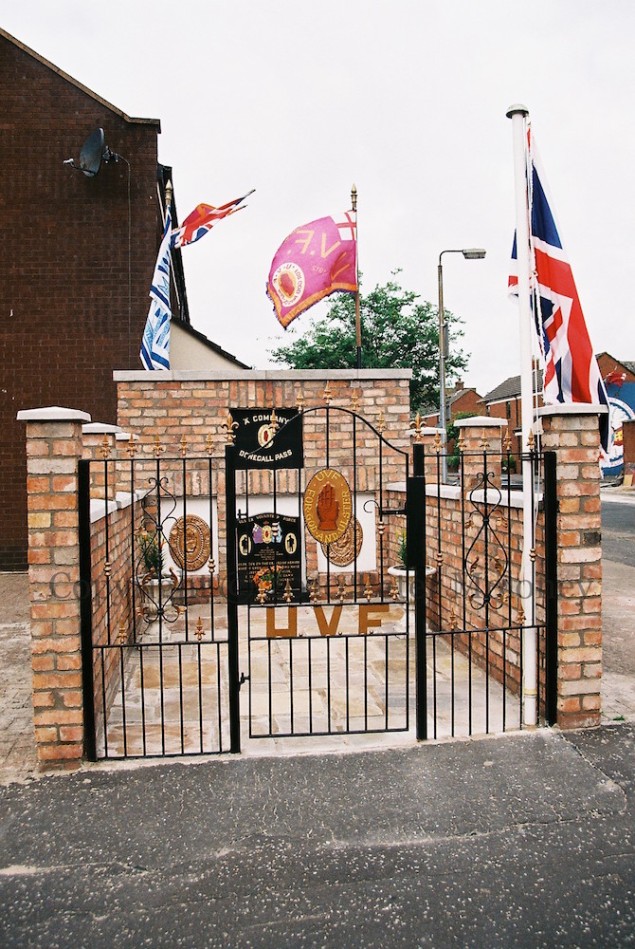 “In proud memory of our fallen comrades from the officers and members of South Belafst 2nd Battalion [‘A’ Company Donegall Pass] ‘Glorious on the graves of heroes, kindly upon all those who have suffered for the cause. Thus will shine the dawn. They gave their tomorrow for our today.'” UVF memorial garden in Walnut Street.

Orange Order banner outside the lodge on Sandy Row with Queen Elizabeth II on one side and King Billy on the other. “One faith, one crown.” 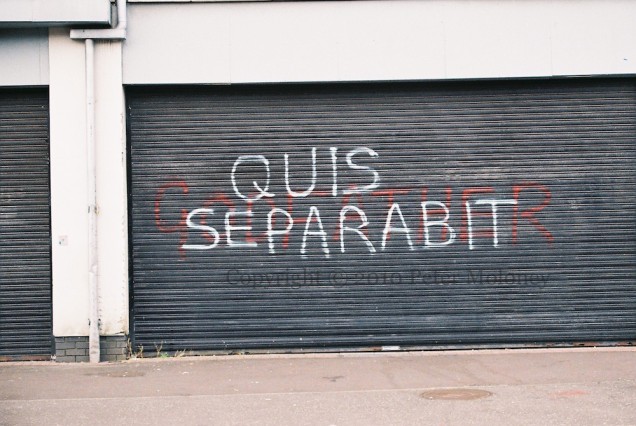 “Shakey U were ‘simply the best’ RIP. Quis separabit” on top of “Gerry Adams paedophile godfather.” Perhaps a UDA tribute to John ‘Shakey’ Wallce of the RHC. Donegall Road, Belfast.

This is the scene in Templemore Avenue during the Twelfth season, 2010. The post box and lamp-posts are painted in red, white, and blue, and Orange Lodge banners hang from the cross-bars.

The theme “Remember the fallen from war” is illustrated by a bombed-out Ballymacarret library on Templemore Avenue and St. Patrick’s church, which is just across the street from the mural, both of which were hit during the blitz in 1942, a police land rover, Cuchulainn, and (representing peace??) Stormont. We are supposed to remember the dead because (perhaps) their deaths were, while necessary, misguided as means to peace, at least according to the saying along the bottom (sometimes attributed to Einstein): “Peace cannot be kept by force; it can only be achieved by understanding.” If you have a better interpretation, please leave a comment.

The mural was imitated on the hoarding around the Cultúrlann on the Falls Road during its renovation – see X01279.

The UVF flute band celebrates its 41st anniversary with a banner over Newtownards Road, Belfast. There was one in 2009 for the 40th. “They said we’d never last.”