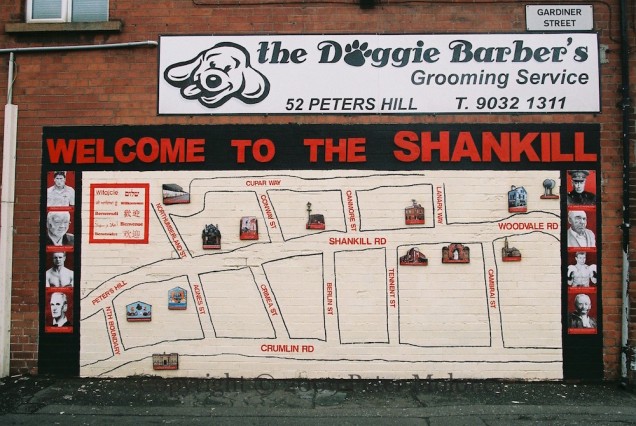 Titanic sails (impossibly) between the Giant’s Causeway (on the left) and one of the Harland & Wolff cranes (and under Napoleon’s Nose), replacing a UDA mural in Downing Street, Belfast.

A large banner in Spier’s Place above the 90th anniversary UVF mural and the memorial to Marchant, King, and Hamilton.

“This mural is dedicated to the fallen volunteers of No 4 Pltn A Coy 1st Belfast Battn, Ulster Volunteer Force who dutifully served this community in the years of the conflict. It pays tribute both to those who died on active engagement an to the many who passed peacefully from service having fulfilled their duties. Their names and deeds are eternally venerated by their comrades in arms who humbly serve in their honor. ‘They remained staunch to the end against odds uncounted/And fell with their faces to the foe/Their names liveth for evermore’.”

The plaque reads “In memory of our fallen comrades no. 4 platoon A coy. 1st battalion Belfast. Lest we forget.”

The hoarding in “C Coy St” is removed and a new board celebrating the “Ulster Volunteer Force 1913 – West Belfast Volunteers ‘Shankill Boys'” is added above the mosaic of the 36th Division’s crest. 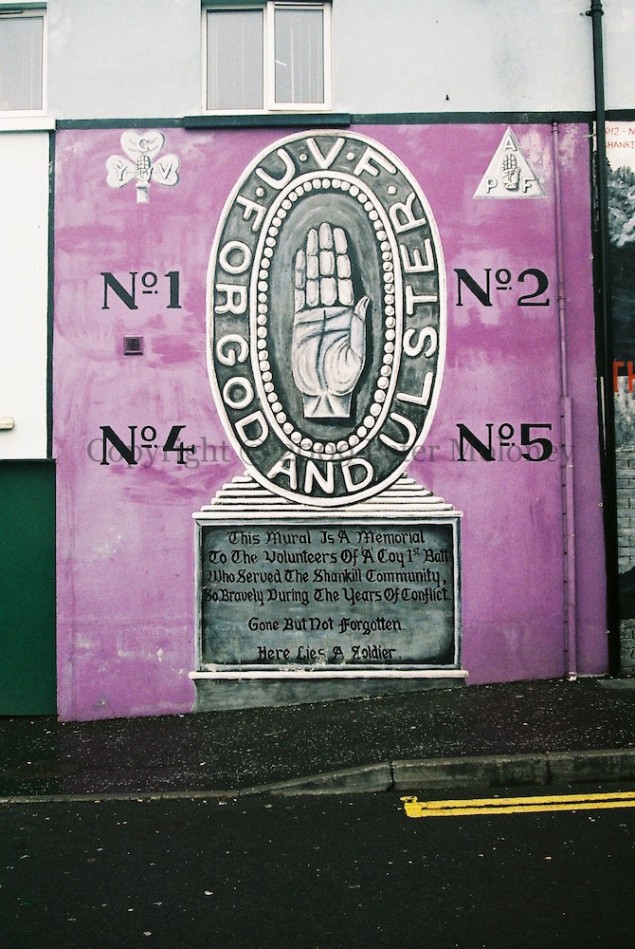 2009 image of a fading UVF mural in Canmore Street (compare 2005 and 2008). “This mural is a memorial to the volunteers of ‘A’ Coy 1st Batt who served the Shankill community so bravely during the years of conflict. Gone but not forgotten. Here lies a soldier.” 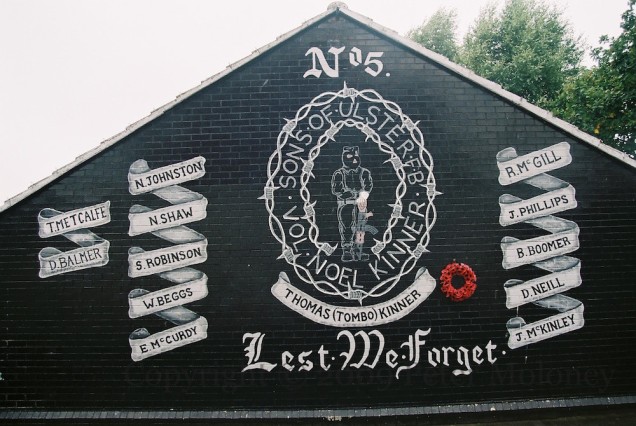 The Sons Of Ulster (Fb)/UVF mural in Conway Walk is repainted (compare with 2006). The main wall adds some new names on the far left (Metcalfe and Balmer); the side wall is converted to an image of the 36th (Ulster) Division going over the top.

“In times of need they Volunteered/Came forth to do the right/They never shirked nor faltered/In their noble, gallant fight.//A gratitude to one and all/To all of Ulster’s best/You will never be forgotten/In our hearts and thoughts you rest.”

“At this spot, on 13th August, 1975, five Protestants were killed and up to sixty injured during a Republican bomb and gun attack, led by ex-trainee priest and IRA leader, Brendan ‘Bic’ McFarlane, a close associate of Gerry Adams and Martin McGuinness, achieved, in part, exactly what they set out to do – to murder and maim members of our community in cold blood. … although their mission was completed, their callous agenda failed … the people of West Belfast … emerged stronger and even more resolute, to defeat the pure evil that is Irish Republicanism, once and for all! … the Irish Republican Army … were a homicidal, guerrilla grouping! A criminal organisation devoid of conscience! … a sectarian murder gang. … ” Hugh Alexander Harris, Samuel Gunning, William John Gracey, Joanne McDowell, Linda Boyle. “Erected by the Bayardo Somme Association “A forgotten atrocity”” The attack was in retaliation for the Miami Showband killings and the bar was chosen because it was used by the UVF. Harris was in the UVF and Brigade Staff had been at a meeting in the bar but it had already broken up (WP).

Aberdeen Street, Belfast, on the former site of the Bayardo Bar.

“Menin Gate, Ypres, Belgium.” “To the armies of the British empire who stood here from 1914 to 1918 and to those of the dead who have no grave.” “Pro patria, pro rege.” Almost 55,000 names are inscribed on the memorial. Aberdeen Street, Belfast. 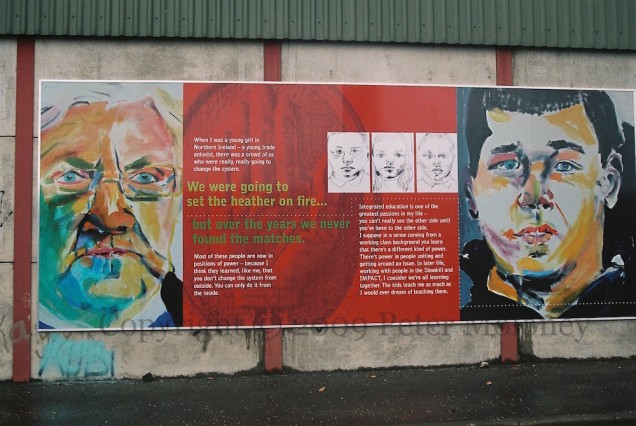 This sequence of ‘Shankill life’ murals is led off by Baroness May Blood, a Labour peer and MBE for her work with the TGWU and integrated education. The other panels show children’s art and celebrate the sense of community, those who served and died in WWI, 11th night, the Orange Order, and the women’s group. Cupar Way, Belfast.