Jim O’Neill was killed in February 1976 during an IRA arson attack on a furniture warehouse on the Antrim Road near the New Lodge – Gerry Fitt’s house next door might have been the ultimate target (Belfast Child); Robert Allsopp appears to have accidentally shot himself in March 1975 (Irish Peace Process). Both were members of Na Fianna. The flute band (Fb) is named in their memory.

“James Connolly 1868-1916 James Connolly was born in June 5th 1868. In 1810 he became organiser for the Irish Transport And General Workers Union in Belfast. In 1913 he co-founded the Irish Citizen Army. He was one of the signatories of the 1916 Proclamation and commanded HQ in the GPO during the 1916 Rising. He was executed by the British on May 12th 1916.”

“Nora Connolly O’Brien 1893-1981 Nora Connolly was the 2nd daughter of James Connolly. Nora was a member of Cumann Na mBan and the Gaelic League in Belfast. She played an organisational role in the ICA in the run up to the 1916 Rising. She was a trade unionist and remained so throughout her life.”

The mural was launched on May 3rd.

This is a second painting of the ‘Women In Struggle’ board in the Rock streets, using the same layout and figures as before. The original was seen previously in 2002.

A tarp is added to the Ardoyne memorial garden putting the 12 deceased hunger strikers from the modern Troubles alongside those who were executed for their part in the Easter Rising. “The ideals behind the Proclamation, the Easter Rising and the hunger strikes are the ideals which drive Sinn Féin today, social equality, economic and political freedom and the believe [sic] that all the people of the island should benefit from the labour of the island. It is for this reason that this signatories, the hunger strikers and the thousands of others gave their lives.”

“Over a third of all children, are growing up in poor households. About 185,000 of households are in poverty, representatin about 502,000 people. Over 148,000 of these are children.” This is in contradiction with the aims of both the Proclamation of Éirí Amach Na Cásca, 1916 – “… cherishing all of the children of the nation equally and oblivious of the differences carefully fostered by an alien government, which have divided a minority from the majority in the past” – and the Democratic Programme of An Chéad Dáil, 1919 “… to secure that no child shall suffer hunger or cold from lack of food, clothing or shelter, but that all shall be provided with the means and facilities requisite for their proper education and training as citizens of a free and Gaelic Ireland.” The other images are of Béal Feirste 1969, Léana An Dúin 1972, and Na Stailceanna Ocrais, 1981.

This looks very much like a Ristead Ó Murchú creation.

The wall has been seen before (in 2009) (though the flags are a new addition) but here are close-ups of the street sign (“RPG Avenue”) and the IRA 2nd battalion plaque. Originally the plaque had only seven names – see Free Ireland. “Fuair siad bás ar son na hÉireann” [They died for Ireland], “Ireland unfree will never be at peace“.

The centenary mural for Fianna Éireann is modified with a 30th anniversary “H” in place of the Easter lily in the bottom right corner. 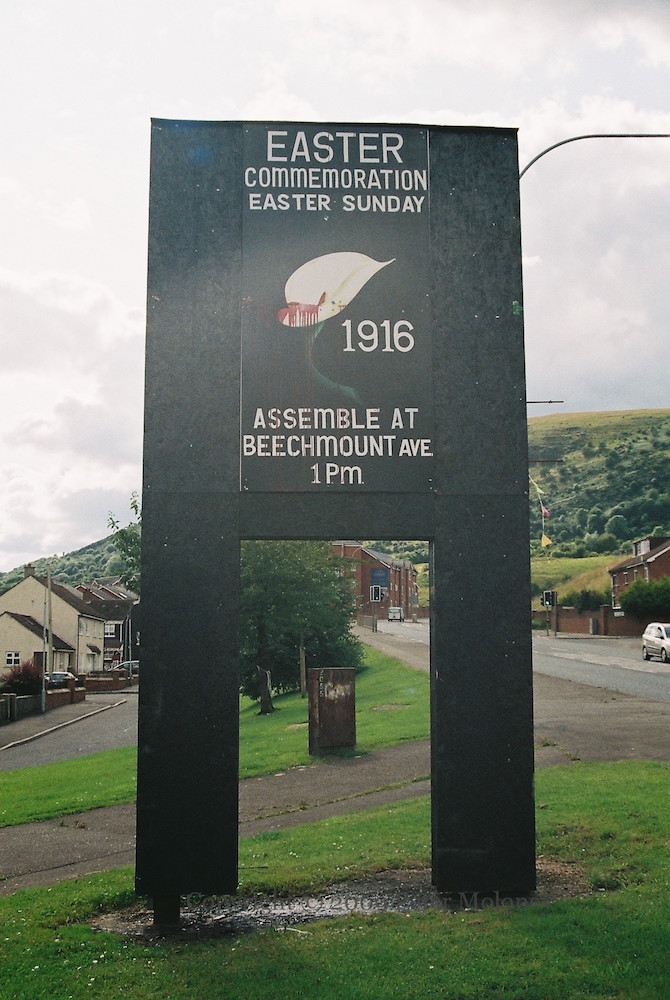 “Easter [1916] commemoration. Easter Sunday. Assemble at Beechmount Ave 1 pm.” On the “H” at the top of Springfield Road/Monagh Bypass.