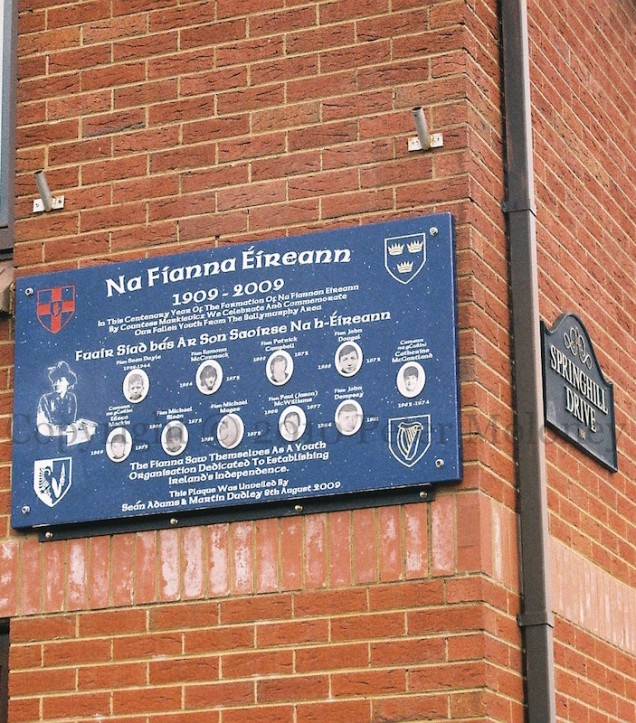 “This monument was erected by the republican people of greater Ballymurphy in proud and loving memory of all those volunteers from the area who gave their lives in the fight for Irish freedom.” Volunteers McParland, Kane, Maguire, Meehan, Sloan, McCormick, Campbell, Magee, Dougal, McCrudden, Clarke, Parker, Quigleey, Mulholland, O’Rawe, McGartland, Mulvenna, Pettigrew, Bryson, Teer, Stone, McGrillen, Tolan, McWilliams, Delaney, O’Neill, Jordan, Doyle, McCracken, McGeown. “Unveiled by Gerry Adams 12th May 1985. I ndíl cuimhne i gcónaí ag na poblachtánaigh ón cheantar Barr Cluanaí. Also in memory of the civilians who died at the hands of the British Army, RUC, UDR, and loyalist extremists.” The launch date of 1985 refers to the plaque’s former location in Glenalina Road (seen in 2001 and 2002).

Four painted pillars at the entrance to the park on Springhill Avenue. By Mo Chara Kelly. 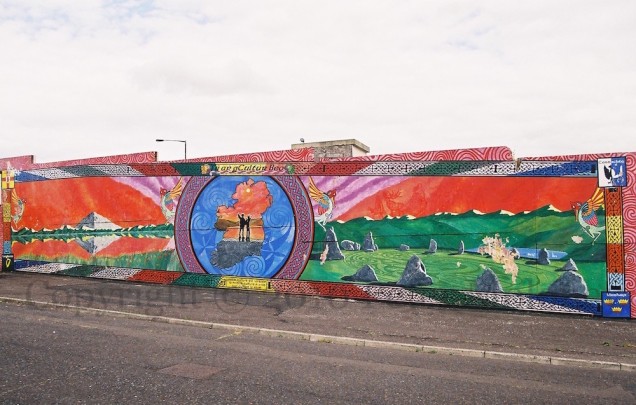 Tá Ár gCultúr Beo (“Notre culture est vivante/La nostra cultura e viva/Our culture is alive”) was painted by Mo Chara Kelly with help from the local youth. The red parts of the mural use a translucent medium that Kelly had become acquainted with while painting in the United States (An Phobal A Phéinteáil 10) that allow additional figures from modern Ireland (left) and Celtic Ireland (right) to be seen. The winged figure (repeated four times) is a heron that he found in a book of Celtic designs while serving time in Long Kesh.

The mural was the first of four projects in Springhill facilitated by the Upper Springfield Development Trust as part of a “West Belfast Arts & Heritage Trail” (as per the plaque just out of view to the right) or “Public Arts Trail”. 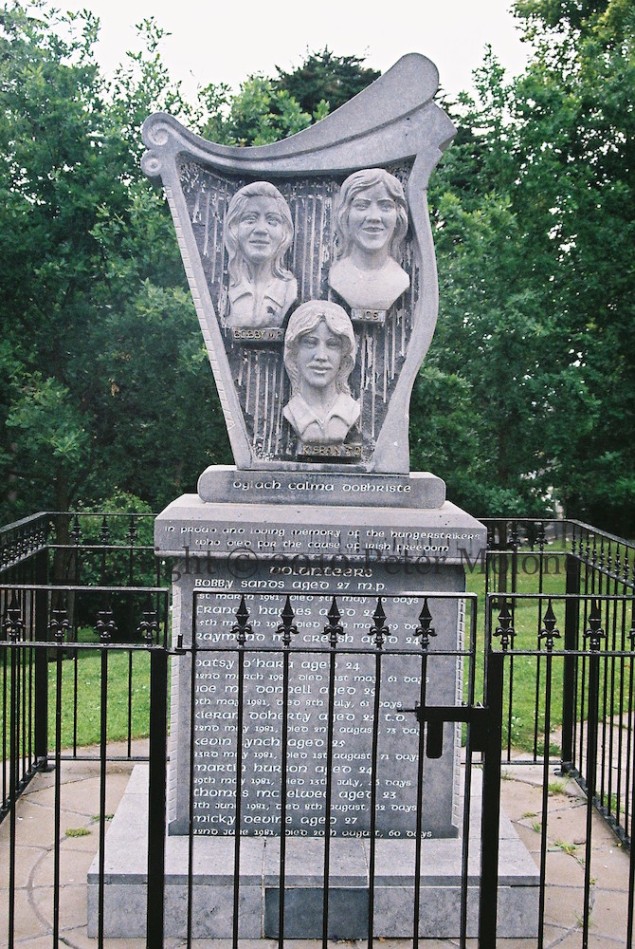 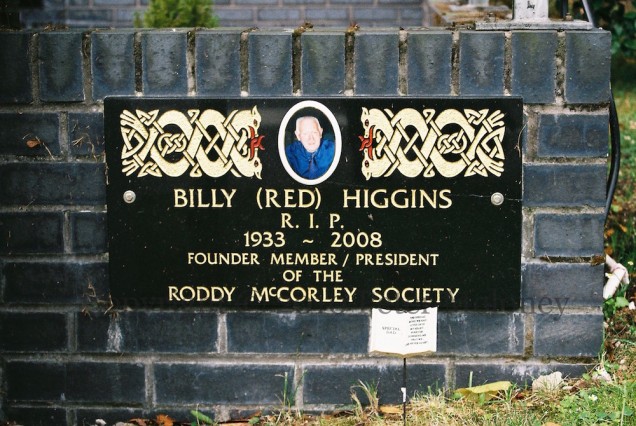 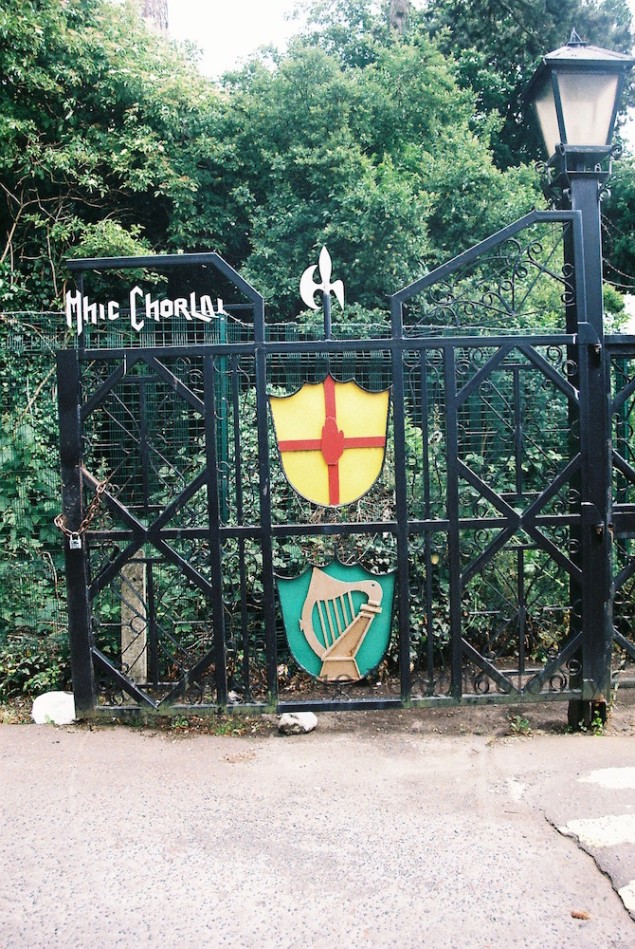 Images from the grounds of The Roddys club, Glen Road, Belfast, with memorials to McCorley (“In memory of Rody McCorley who was hanged here for his part in the rising of 1798 ‘The dead who died for Ireland, let not their memory die””), the deceased 1981 hunger strikers, the earlire 20th century hunger strikers (Thomas Ashe, Michael Fitzgerald, Terence MacSwiney, Joseph Murphy, Joseph Whitty, Denis Bary, Andrew Sullivan, Tony D’Arcy, Jack McNeela, Sean McCaughey, Michael Gaughan, Frank Stagg), Lenadoon deaths (Tony Henderson, Tony Jordan, John Finucane, Laura Crawford, Brendan O’Callaghan, Joe McDonnell, Mairead Farrell, Bridie Quinn, Patricia Black), Billy ‘Red’ Higgins founder member/president of the club, IRA volunteers from Lenadoon, “to the Irish men and Irish women who gave their lives in the rebellion of 1798”. Roddy McCorley, a Protestant member of the United Irishmen, is best known by the song written about his hanging at the bridge of Toome in 1800. (Here’s a version by Tommy Makem.)

Mural in the Glen Colin estate, just off the Glen Road showing The Roddy’s club (in white) with the hunger striker memorial in the shape of a harp in front and the St. Oliver Plunkett church, which is in fact on the other (southern) side of the Glen Road, with the twin peaks of Divis and Black Mountain in the background. The Bobby Sands quote “Our revenge will be the laughter of our children” is at the bottom and three Gaelic games players on the right.

The main plaque (shown first above) is new; like its predecessor (see M02186)  list of the local dead of the IRA 1st battalion, Belfast brigade and related members of the republican movement. (A shorter list is on the plaque to the left, shown second.) There is also a 200th anniversary plaque for the 1798 rebellion: “1798-1998 Who Fears To Speak Of 98. This plaque was erected to the memory of the United Irishmen who gave their lives for Irish freedom also those who died as a result of the Great Hunger. ‘These are the times that try mens’ souls.’ [- Thomas Paine] The rich always betray the poor.’ – Henry Joy McCracken.” The memorial garden is next to the Andersonstown Social Club (a.k.a. the PD or “People’s Democracy”).

“Coiste Chontae Aontroma CLG 125 Bliain. Cluichí cultúr agus teanga.” [County Antrim GAA Committee, 125th anniversary] Casement Park, named after Roger Casement (in the lower right knotwork WP), was opened in 1953, blessed by Cardinal D’Alton, the Roman Catholic Archbishop of Armagh and Primate of All Ireland (shown in the lower right. The central panel shows Setanta, who became Cú Chulainn by (in one version) killing Culann’s hound with a sliotar. (Victor Patterson has an image of a British Army post being constructed on the pitch.) Andersonstown Road, Belfast. (The same image would later be used on the bookies at bottom of Whiterock Road. See X00549)