Flames have been added to the phoenixes on the gates of the New Barnsley memorial garden, previously seen in 2008.

“In memory of the men and women who served in the ranks of the Ulster Defence Regiment 1970-1992”. The statue is by sculptor John Sherlock and was unveiled on June 17th, 2011 (NI World).

In addition to three plaques, a wrought-iron head-piece, multiple flag-pole holders and railings fencing in a small area, this mural in Clós Ard An Lao/Ardilea Close in Ardoyne uses painted discs for each of the twelve hunger strikers (the ten in Long Kesh 1981 and two from the 70s in English prisons, Michael Gaughan and Frank Stagg – the twelve also featured in Derry’s Spirit Of Freedom mural), rather than painting their likenesses directly onto the wall. The two quotes are from Bobby Sands “Let our revenge by the laughter of our children” and Michael Gaughan “Let there be no bitterness on my behalf to achieve a united Ireland”.

The items above the mural are new, compared to 2010. The plaque on the left is to people who died “in defence of the area” and on the right to those who died “of natural causes” who endured discrimination, hardship, suffering, imprisonment.

This Sculpture is about unlocking freedom, a community that does not know outward social freedom can still know inward personal freedom. The key to freedom is formed within the heart, each individual has an unseen key that can help a community unlock the knowledge of itself. The Apprentice Angel is a bringer of freedom, he is patterned with keys collected within The Fountain Estate by young people from The Cathedral Youth Club. The Angel holds a large recast key from the Siege of Derry 1689, a key in the hand of an Apprentice that helped turn history, the Past is always present but the Future is key to us all, we alone have the power to unlock it and the right to experience it. Within a community it is young hearts that beat loudest, it is their future that we must help unlock with the keys of Freedom. This was a Cathedral Youth Club project funded by Arts Council Re-Imaging Communities. Sculptor – Ross Wilson.”

These two artworks are on opposite sides of the new entrance to Dove Gardens adjacent to the gasyard (now a heritage site) on Lecky Road, Derry, after the area was rebuilt. If you know more about them, including the artist(s), please get in touch. There is another copy of the metal piece at Stanley’s Walk x Cable Street. 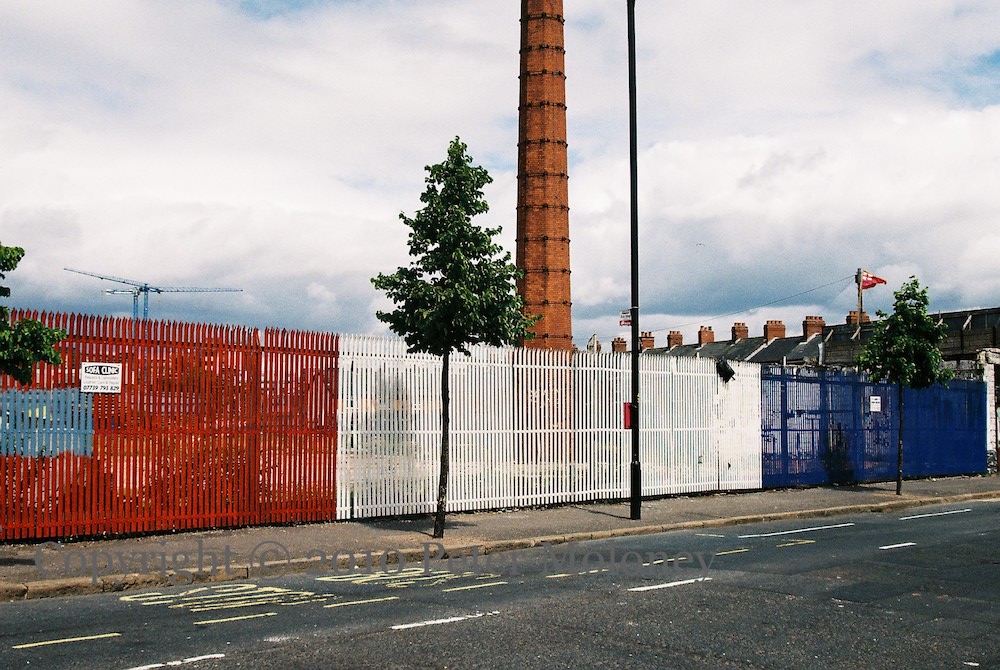 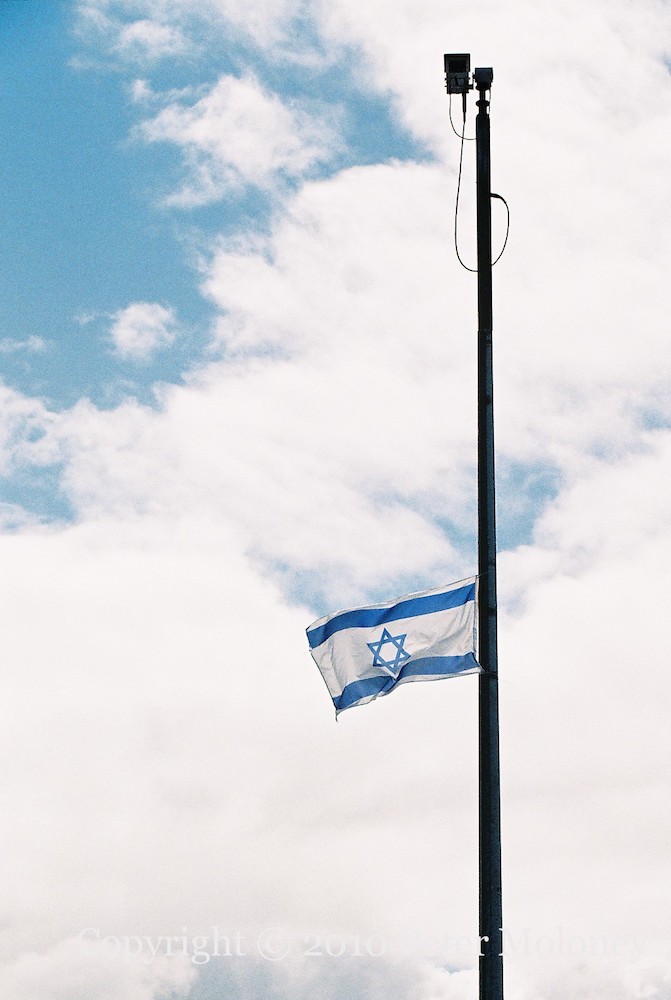 An Israeli flag below a security camera, and red, white, and blue fencing along Donegall Road, at the western entrance to the Village.

The (locked) gates of the 1st Shankill Somme Association (Fb) garden of remembrance, next to the Mountainview Tavern. The metal-work shows the insignia of the 36th Division; the plaques on the gate-posts show the Ulster Tower memorial in Thiepval, France. 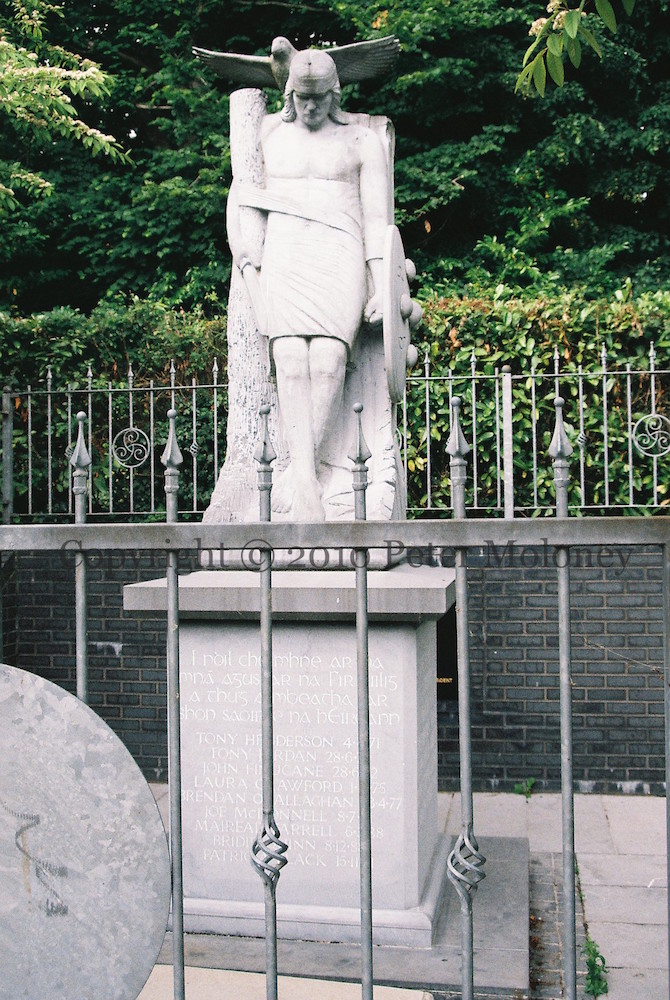 Images from the grounds of The Roddys club, Glen Road, Belfast, with memorials to McCorley (“In memory of Rody McCorley who was hanged here for his part in the rising of 1798 ‘The dead who died for Ireland, let not their memory die””), the deceased 1981 hunger strikers, the earlire 20th century hunger strikers (Thomas Ashe, Michael Fitzgerald, Terence MacSwiney, Joseph Murphy, Joseph Whitty, Denis Bary, Andrew Sullivan, Tony D’Arcy, Jack McNeela, Sean McCaughey, Michael Gaughan, Frank Stagg), Lenadoon deaths (Tony Henderson, Tony Jordan, John Finucane, Laura Crawford, Brendan O’Callaghan, Joe McDonnell, Mairead Farrell, Bridie Quinn, Patricia Black), Billy ‘Red’ Higgins founder member/president of the club, IRA volunteers from Lenadoon, “to the Irish men and Irish women who gave their lives in the rebellion of 1798”. Roddy McCorley, a Protestant member of the United Irishmen, is best known by the song written about his hanging at the bridge of Toome in 1800. (Here’s a version by Tommy Makem.)

Three suspected IRA car bombs exploded on Main Street, Claudy, on July 31st, 1972, killing nine people and injuring 30. This memorial on Church Street was designed by Elizabeth McLoughlin and unveiled in 2000.  The plaque also acknowledges “the suffering and loss of many others in the Claudy region over the years.”

2009 image of the hunger strikers metalwork on the site of the former RUC barracks. The background wall has been repainted in plain white; previously it was painted as a sky with clouds (see 2006 and 2008).