One of the most potent icons in loyalist muraling is Eddie The Trooper.

Eddie The Head is a zombie skeleton created by Derek Riggs. He appears on the covers of various records by the English heavy metal rock group Iron Maiden, beginning with 1980’s ‘Running Free’ (MetalRulz). Eddie The Head takes various forms on the covers of various records, from a WWII fighter pilot to an Egyptian pharaoh. In 1983, he took the form of a British soldier on the cover of the single ‘The Trooper’ (WP), the second to be taken from the album Piece Of Mind. The song is about the Charge Of The Light Brigade at the Battle Of Balaclava in 1854, during the Crimean War.

It was this Eddie as Red Coat soldier that captured the imagination of the UDA/UFF, and so we refer to him as “Eddie The Trooper”.

The first Eddie in a mural appeared in the Waterside in 1996. It’s appropriate that Eddie first appears in Londonderry, as the skeleton is a part of the crest of the city.

In the Waterside Eddie mural, Eddie The Trooper is a UFF/UDA volunteer rampaging through Londonderry, killing Jacobite soldiers from 1690 in the foreground (symbolic of the Catholic population) while leaving the modern-day Free Derry Corner and The Petrol Bomber mural shrouded in smoke in the background.

There are a few changes between the mural and the cover for ‘The Trooper’: in the mural, Eddie sports a UFF badge on his shoulder, and the victim on the left now wears a distinctively gold-coloured epaulette and belt to go with his green uniform and white sash. The Grim Reaper on the right has been replaced by the murals. 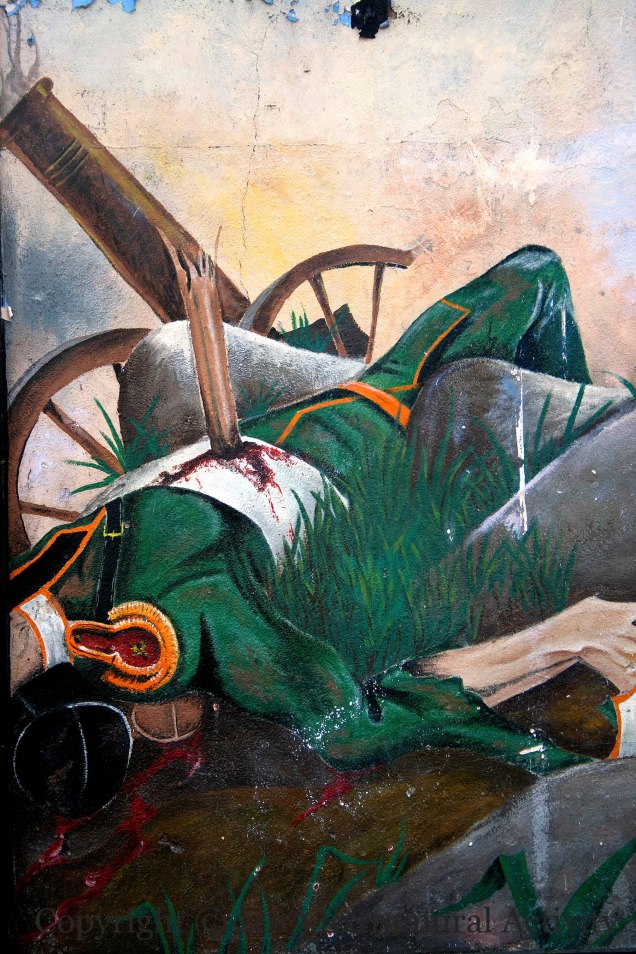 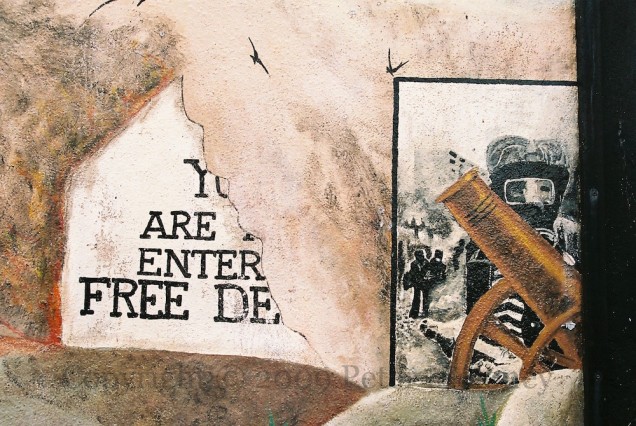 The mural appeared in 1996, which puts it during the peace process – the IRA ceasefire began in 1994 and the Belfast/Good Friday Agreement would be signed on April 10th, 1998. The loyalist reaction to the prospect of peace, in murals at least, seems to have been to tout their own aggressiveness more than ever before. This is true not just in the image of Eddie but in the epigraph. Above the mural are the words, “There must be no retirement. With our backs to the wall and believing in the justice of our cause each one of us must fight on to the end … We determine the guilty, we decide the punishment”. 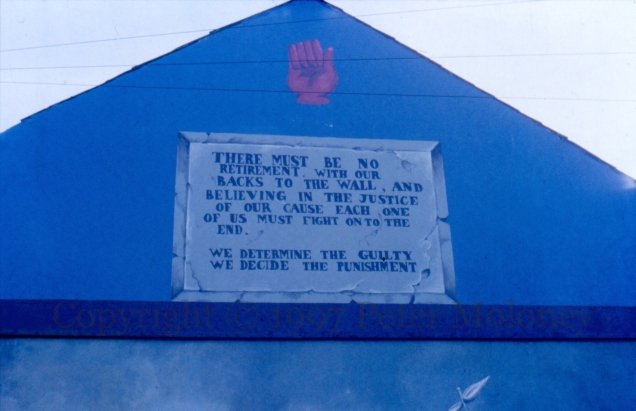 The first part of the words come from the last paragraph of this WWI order by British commander Douglas Haig, commanding his troops to hold despite the German onslaught of April 1918:

Being a zombie, Eddie is of course indestructible, and has continued to stalk the walls since his initial appearance. Rolston (DS3 p. xi) claims that there were “at least six” Eddies in Belfast (east (Dee St), south (Village), west (Shankill), Tullycarnet, and then perhaps including Monkstown and Cloughfern) and another in the Maze/Long Kesh.

2000 Carrickfergus Eddie
In the Carrickfergus Eddie, Eddie is armed with an assault rifle, carries a UDA flag, and leads the grim reaper over the graves of “G. Adams”, “McGuinness” and “A. Maskey” – three Sinn Féin leaders, each holding various elected offices at the time. “Show no mercy and expect none.”

2000 Shankill (west Belfast) Eddie
Shankill Eddie carries an assault rifle and an Ulster Banner. He marches over the graves of “E[ddie] Copeland”, “S[ean] Kelly”, and “S[tephen] Larkin”. The three are IRA volunteers: Kelly, along with Thomas Begley, bombed Frizzell’s fish shop on the Shankill Road in 1993 – Kelly survived; Copeland was injured during an attack on Begley’s wake; Larkin made an attempt on the life of Johnny Adair in 1993.

2001 Village (south Belfast) Eddie
This is a somewhat cruder mural. Village Eddie’s face looks more like a living alien than a skeleton. He carries an assault rifle but no flag, and wears modern fatigues and skull hat.

???? Mosside Eddie
Mosside Eddie carries a black flag over boulders. He was vanquished by the Re-Imaging Communities project in the mid/late 2000s. 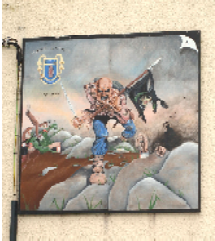 (Image from the 2009 Evaluation of the programme.)

2004 Ahoghill Eddie
Ahoghill Eddie carries a sword and a UFF flag and marches over a barren landscape.
See J2030 or Ballymena Eddie, below.

???? Tullycarnet Eddie (east east Belfast?)
Tullycarnet Eddie carries an assault rifle and a UDA flag and leads the reaper over a field of rocks and skulls. Replaced in 2005 by James Magennis VC.

On the crosses are written not the names of republican targets but the names of bands from the Rathcoole area that no longer exist: “G. Blair Mem” [George Blair Memorial Flute Band – a UVF band], “WPB” [Whiteabbey Protestant Boys], “Sons Of KAI“, “Dam Busters” [Dam Busters Flute Band Newtownabbey], and “EAV” [East Antrim Volunteers – a UVF band]. (Thanks to Joe K for the information about the bands.) “RUC?” might refer to the shifting attitudes towards the police service (PSNI).

There are also two small Eddies on the low wall across the street:

c. 2009 Waterside (Londonderry) Eddie – repaint
The turned-over corners have been painted out and the skyline lowered. 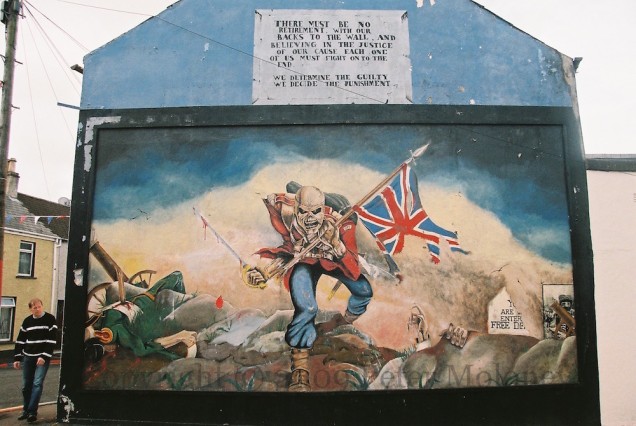 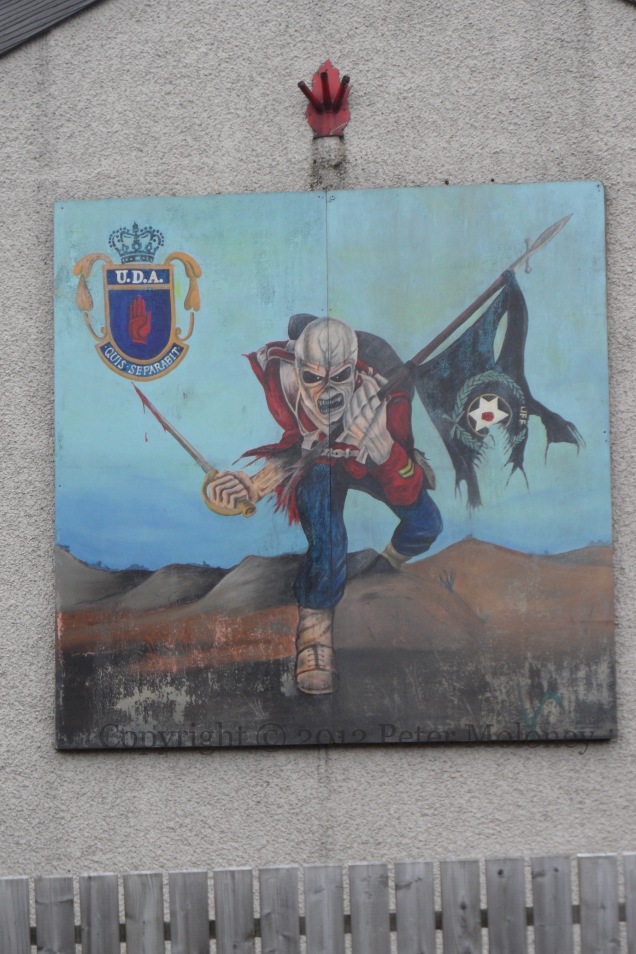 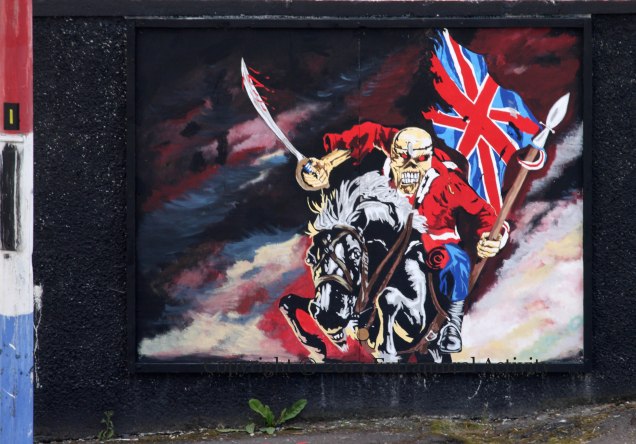 In 2016, the original (Waterside) Eddie was recreated (this time with Grim Reaper included) in a computer-generated image on laminated plastic. Almost immediately, however, the mural began falling apart. 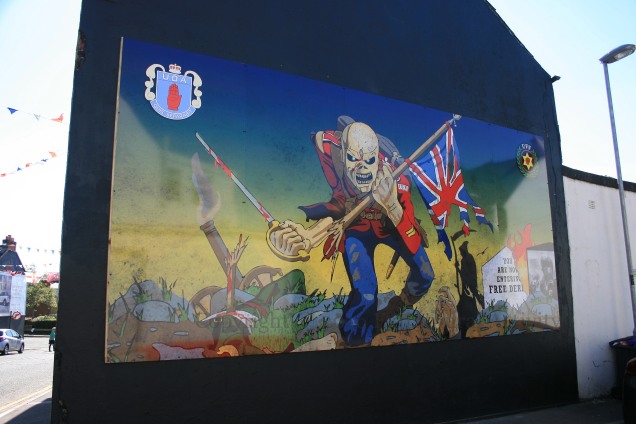 It was replaced with this smaller board:

The seventh anniversary of the ‘flag protests’ (in response to the Belfast City Council vote to only fly the Union Flag on 18 days of the year, as in the rest of the UK) was November 30th, 2019. An Eddie banner appeared on the railings. 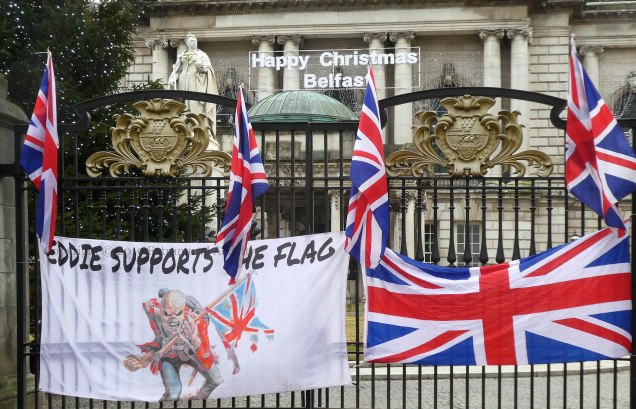 2021 Eddie in Kenbaan Street as part of the UDA memorial. 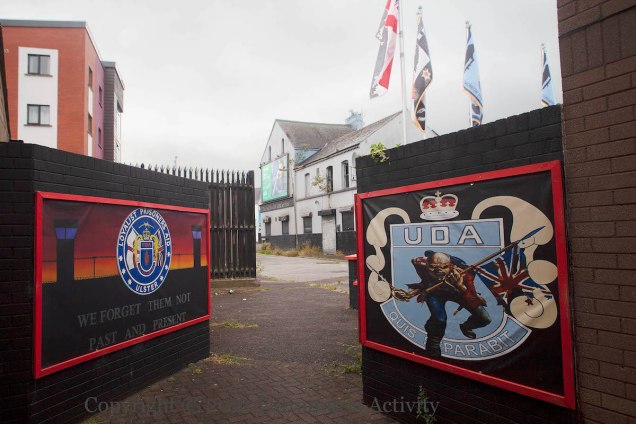 In the summer of 2021, the house at the end of the row that provided the gable wall for Eddie in Bond’s Place was rebuilt and the smaller board (shown above) was moved one neighbourhood over, to Lincoln Court.