M = Peter Moloney Collection – Murals
X = Extramural Activity collection
D = squire93@hotmail.com collection
“DS” = Rolston’s “Drawing Support” series of books.
A number in parentheses at the end of an entry refer to items in a list by Bill Rolston in Brothers On The Wall pp. 457-9) of 32 international murals from 1982-2006.

PLO-IRA. PLO = Palestine Liberation Organization. Ariel Sharon became Israeli Minister of defence in 1981 and in 1982 Israel invaded Lebanon. Note that “RPG Avenue” is on this side of the street; it is gone by 1986’s ANC mural. (1)

“Viva Argentina Ole! Britania [sic] rules the waves no more!” In April, 1982, Argentina invaded the Falkland or Malvinas islands, over which it claims sovereignty.

“Basques OK, ETA OK.” The Spanish constitution of 1978 makes the Basque country an independent “nationality” with Spain, but many in the region reject the constitution. ETA is Euskadi Ta Askatasuna, which at the time was waging an armed campaign. 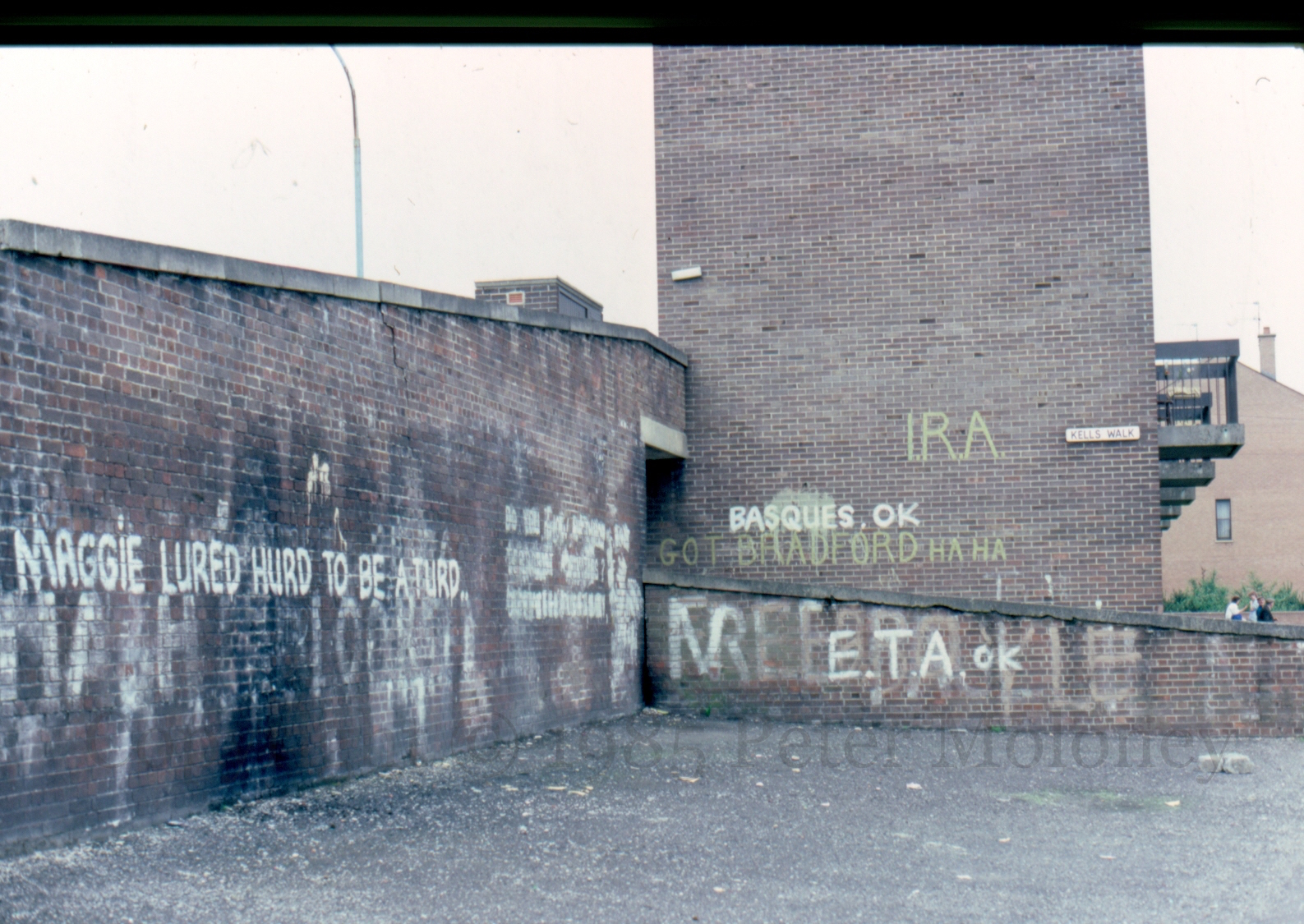 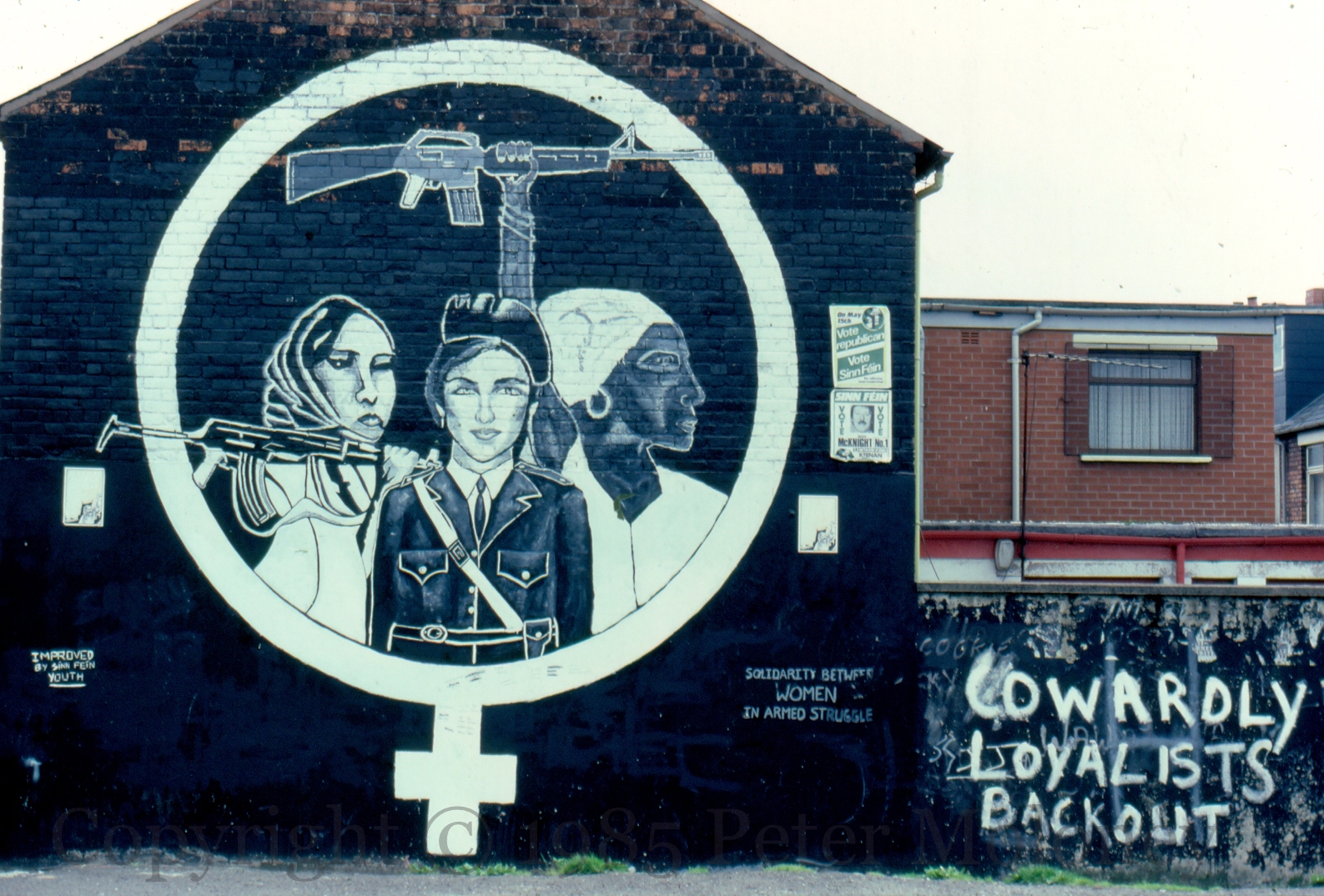 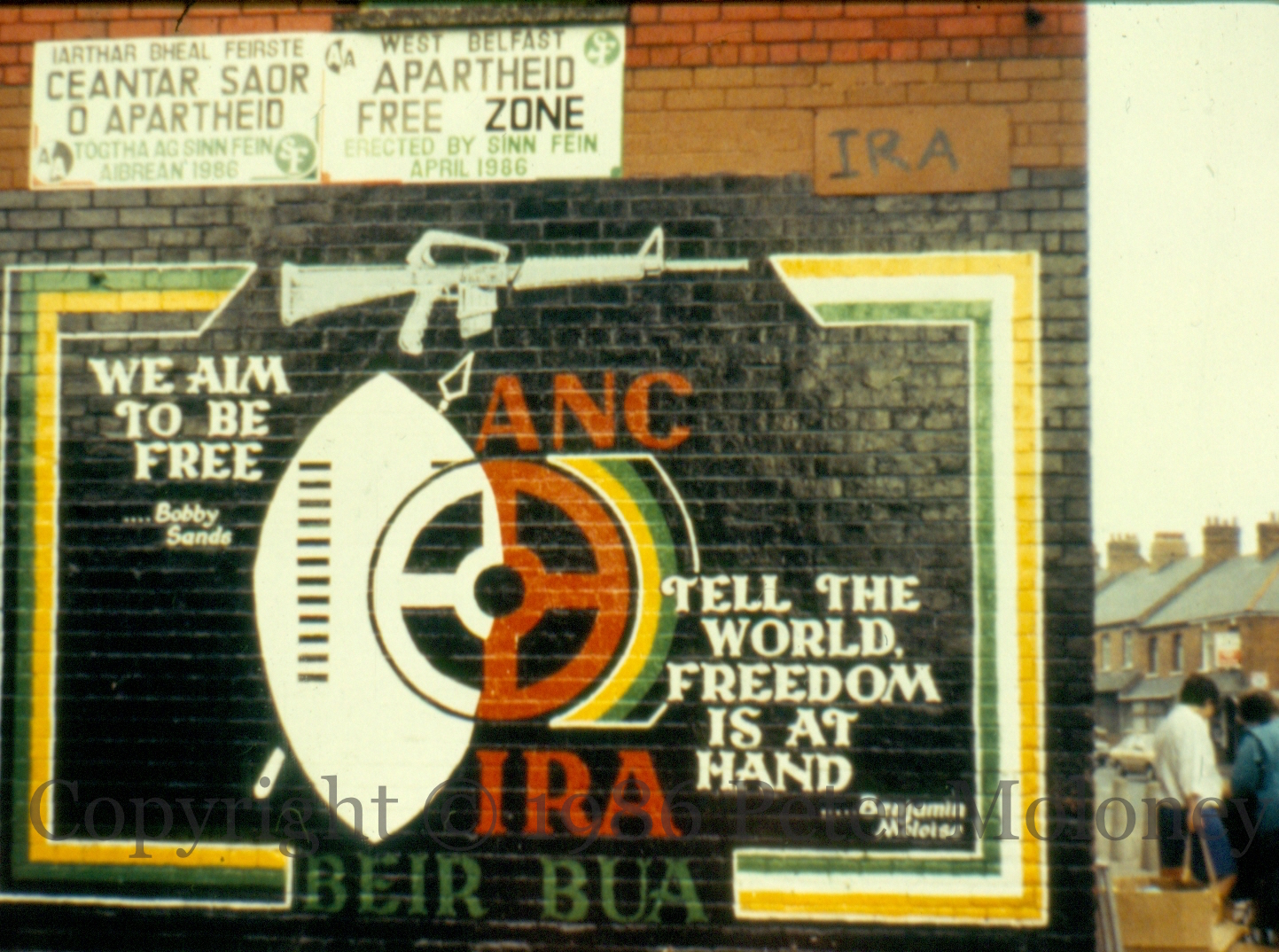 [For discussion of Che as an icon in republican murals, see this article in The Irish Story.]

You Can Kill The Revolutionary. Irish volunteer, James Connolly, Emiliano Zapata, member of the United Farm Workers. Dedicated to the San Patricios. (9)

Doire – Managua. Managua is the capital of Nicaragua. (11)

Free Catalonia graffiti, with drawings of the Catalan flag. 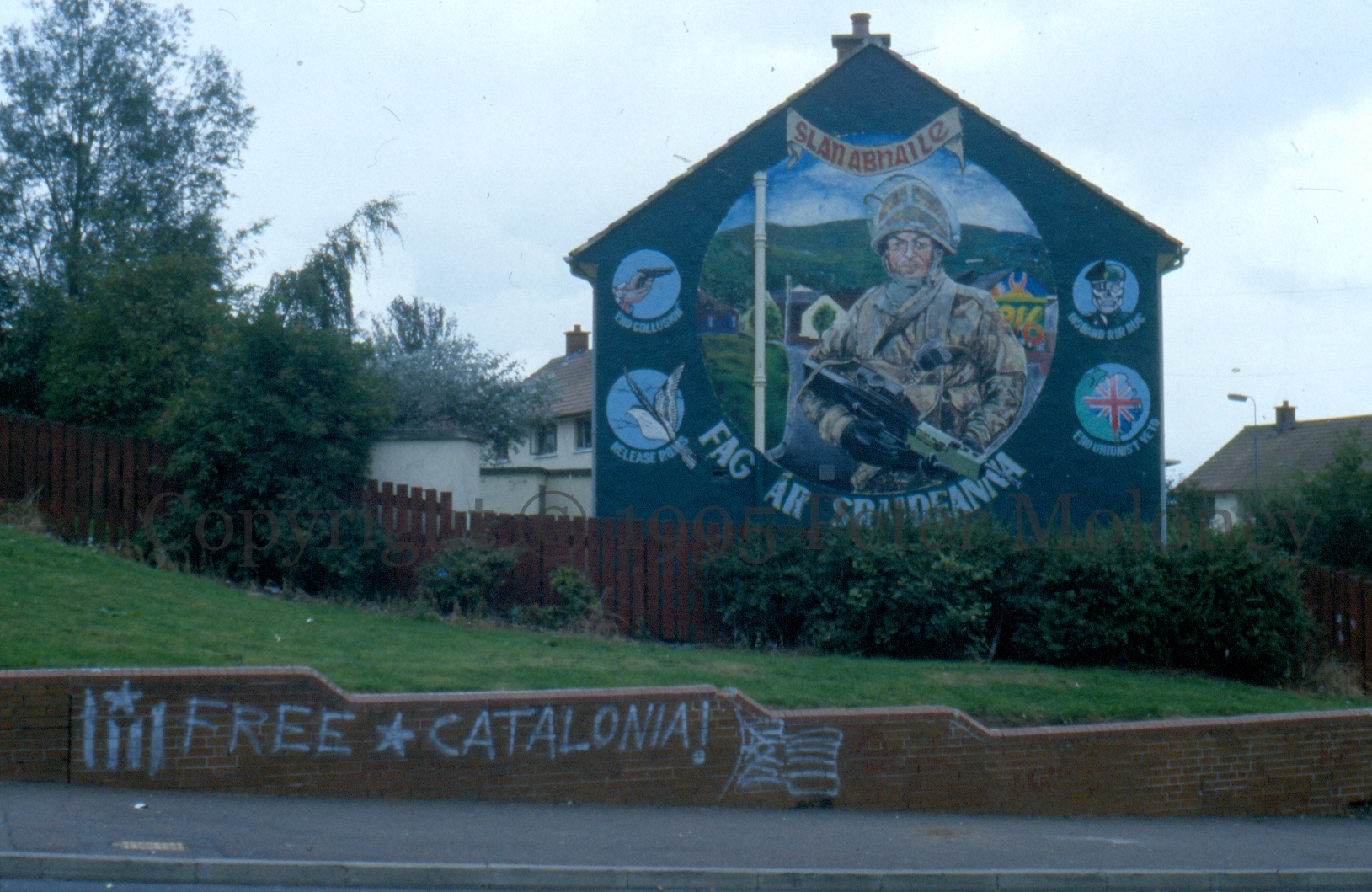 No Pasarán on the walls of Derry

Free Catalonia (Beechmount Ave). Would later be repainted with a white background. (13)

Biko (with, clockwise, Ché, Miriam Daly, Peltier, Lila Khaled, Mairéad Farrell; Mandela on the side wall) with the flags of Catalonia, Ireland, the Basque Country, Palestine, and Mexico, with a (sideways) aboriginal flag on the chimney and the pots painted in the colours of man: red, yellow, white, black. (14)

Children Of The World in Creggan (16)

Londoner Stephen Lawrence was murdered by stabbing in 1993 and, although arrests were made, no charges were brought. A 1998 public inquiry found that the Metropolitan Police Service was “institutionally racist”. In 2012, two of the original suspects were found guilty of the murder (WP). Catholic Robert Hamill was beaten to death by loyalists in Portadown in 1997 while police in an RUC land-rover looked on (WP). 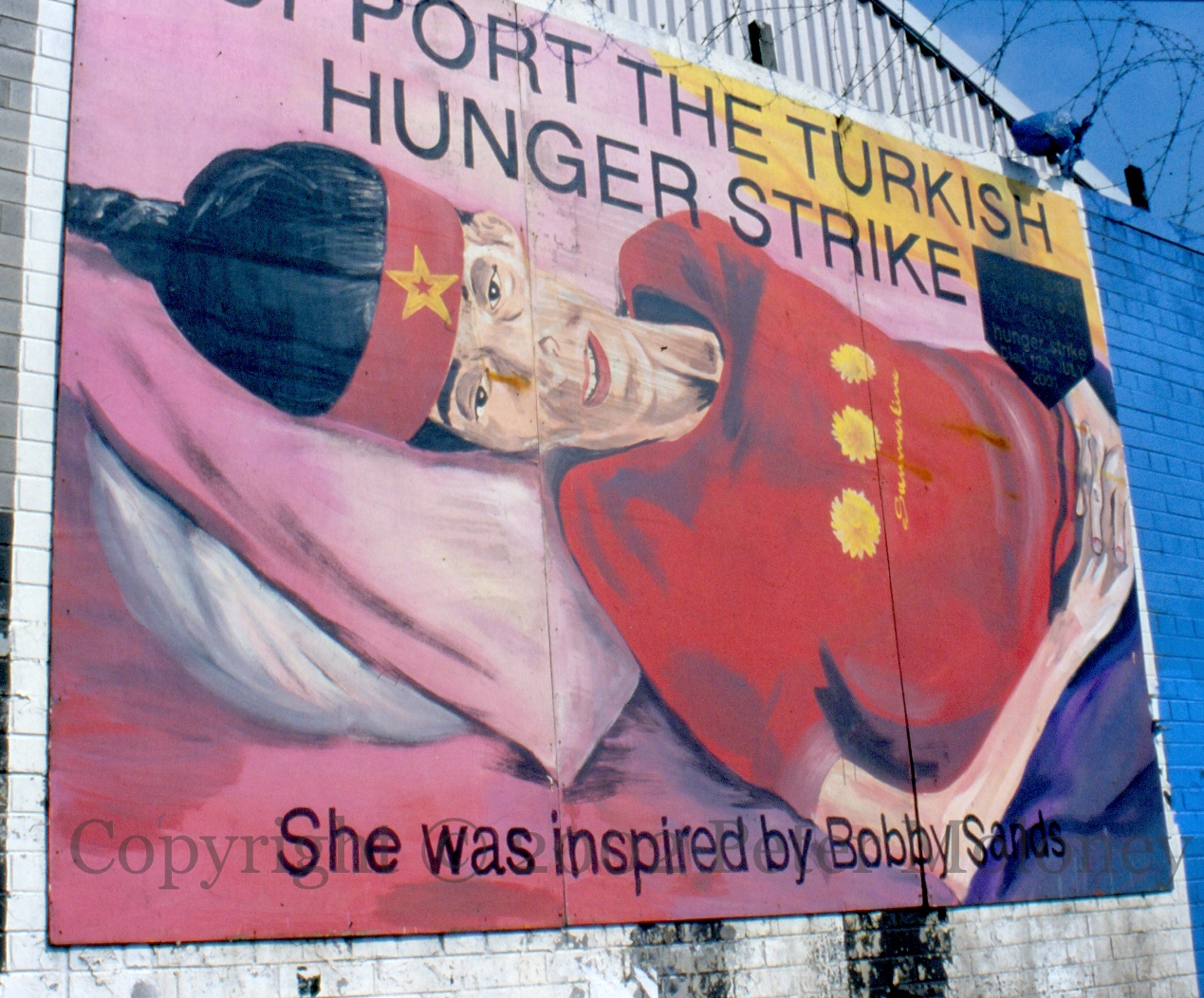 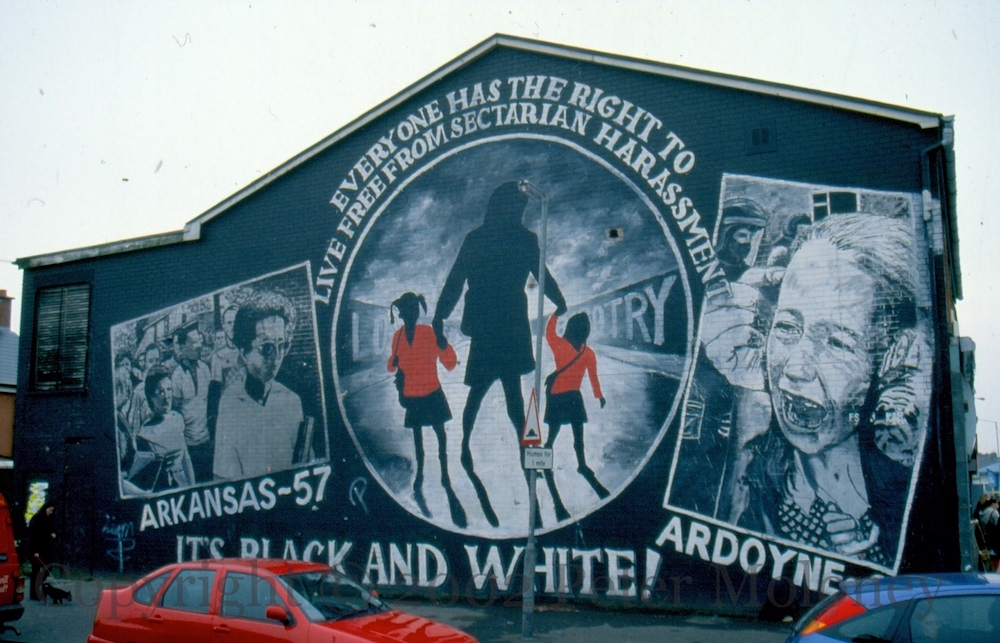 Sharon-Arafat (25) in the Markets, Belfast 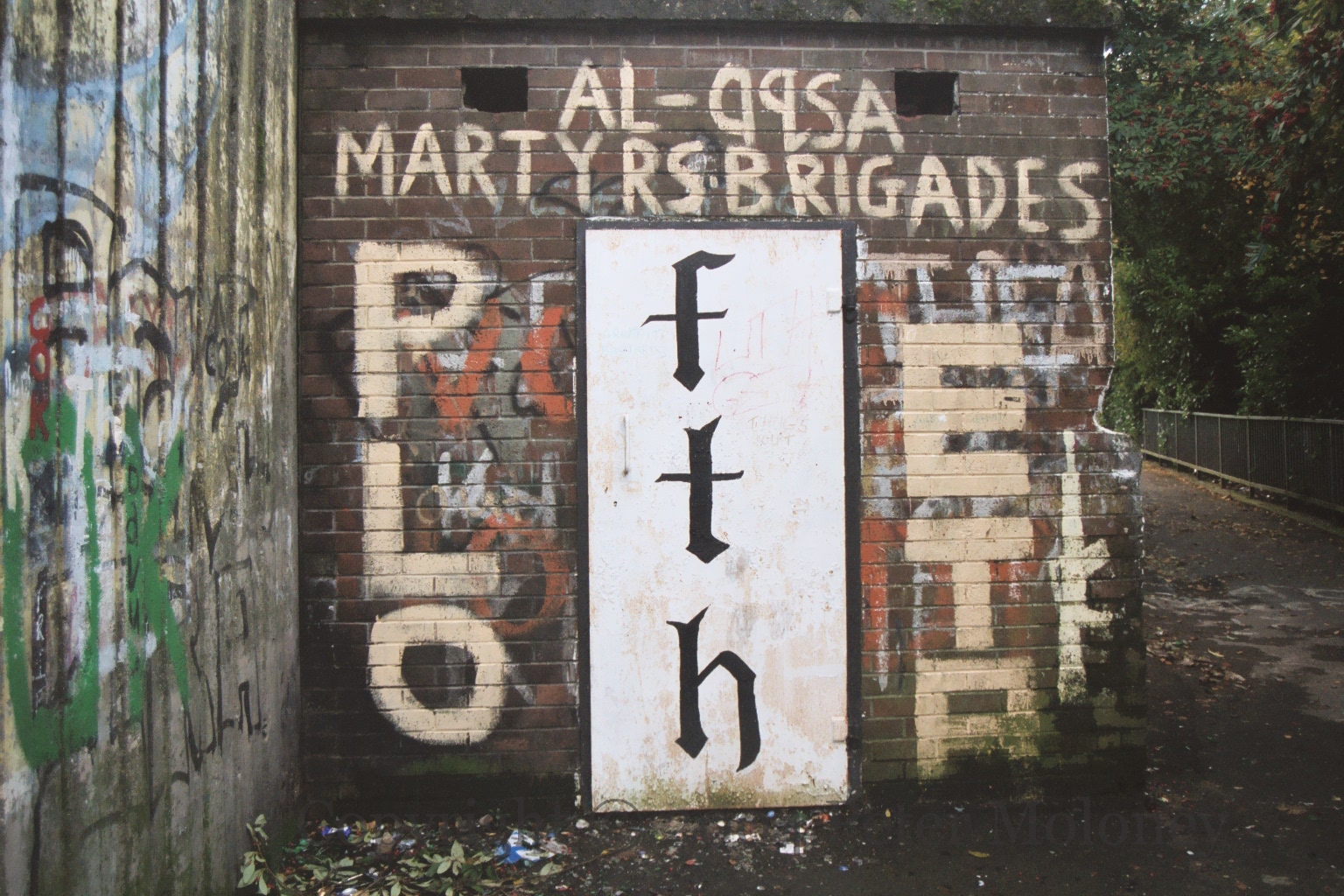 These next two pro-Palestinian murals were off Lecky Road, on the back of the Bogside Inn. 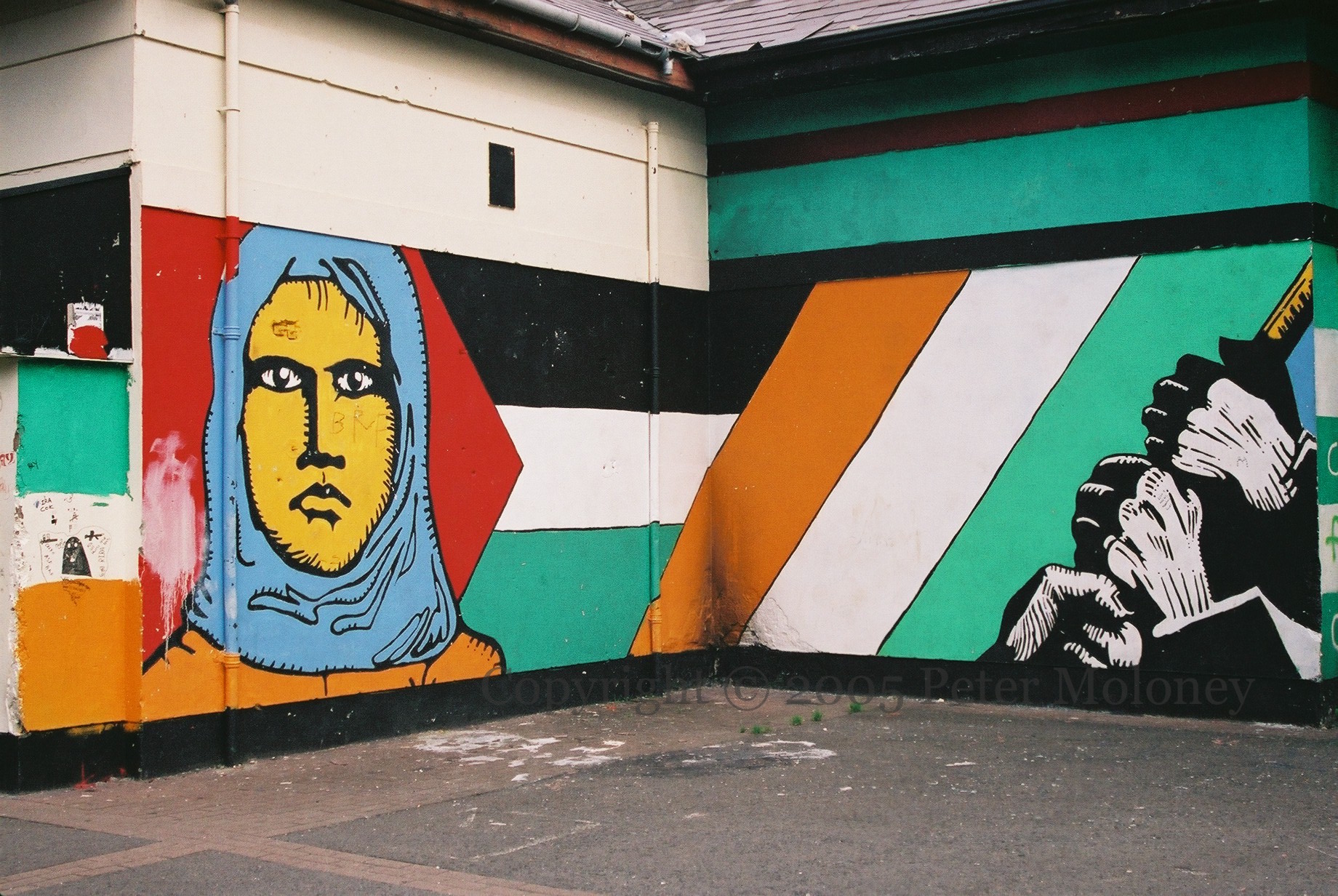 Balata is a refugee camp in the West Bank, near Nablus. 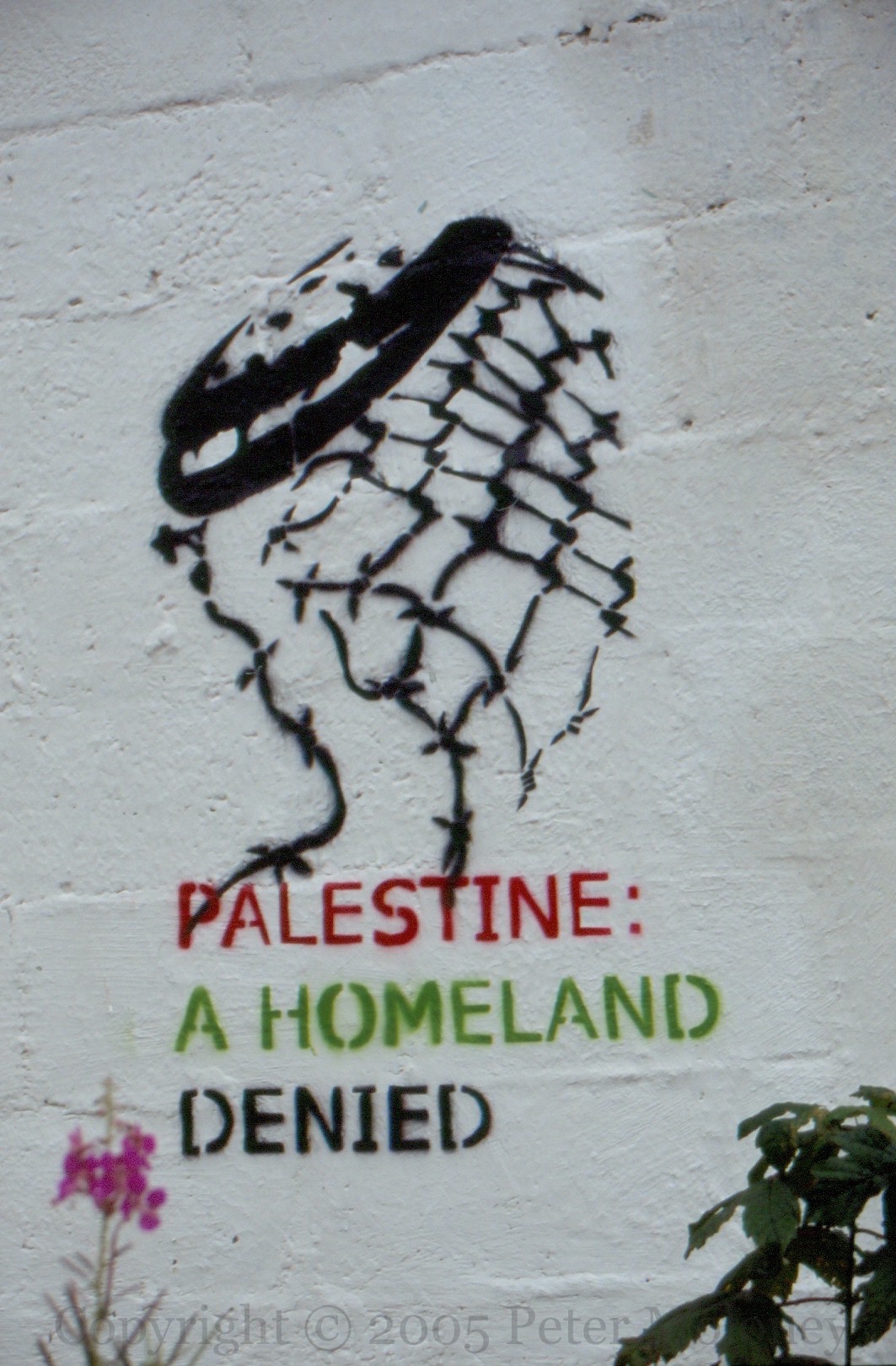 Catalan Countries off the Falls Road in Andersonstown 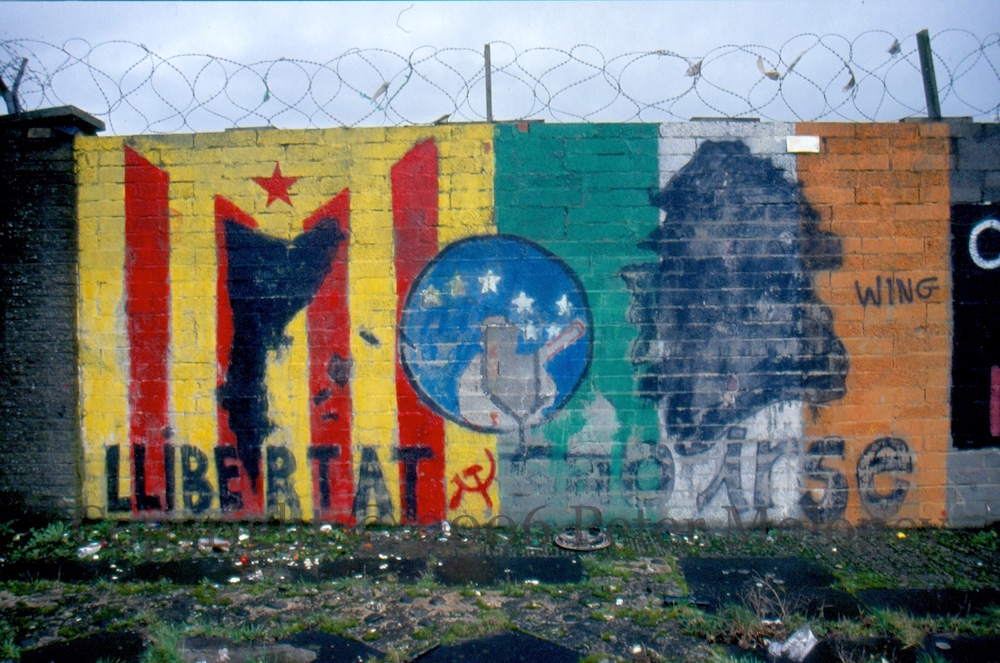 The next two are graffiti on the wall at the old Andersonstown RUC barracks, which was demolished in 2005.

Hezbollah Rule – 2006 was the year of the Lebanon War on the Lebanon-Israel border. Stanley’s Walk, Derry. 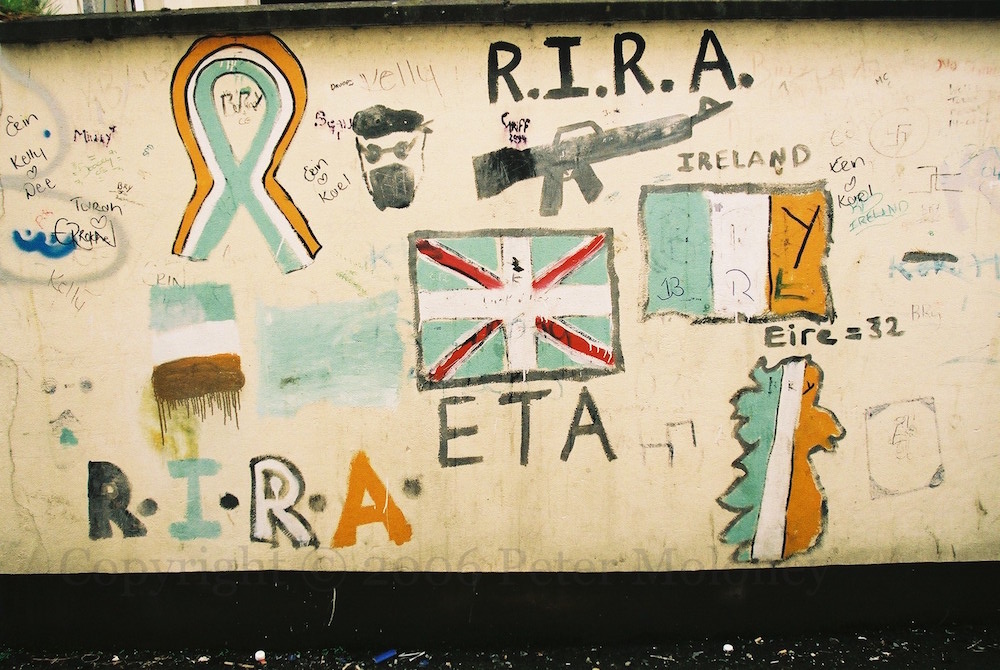 “No imperialist intervention in Iran” on the International Wall, Divis Street, Belfast.
(2006 J2803)

Guernica, reproduced as a mural, depicting the Nazi bombing of the Basque town Gernika during the Spanish Civil War. 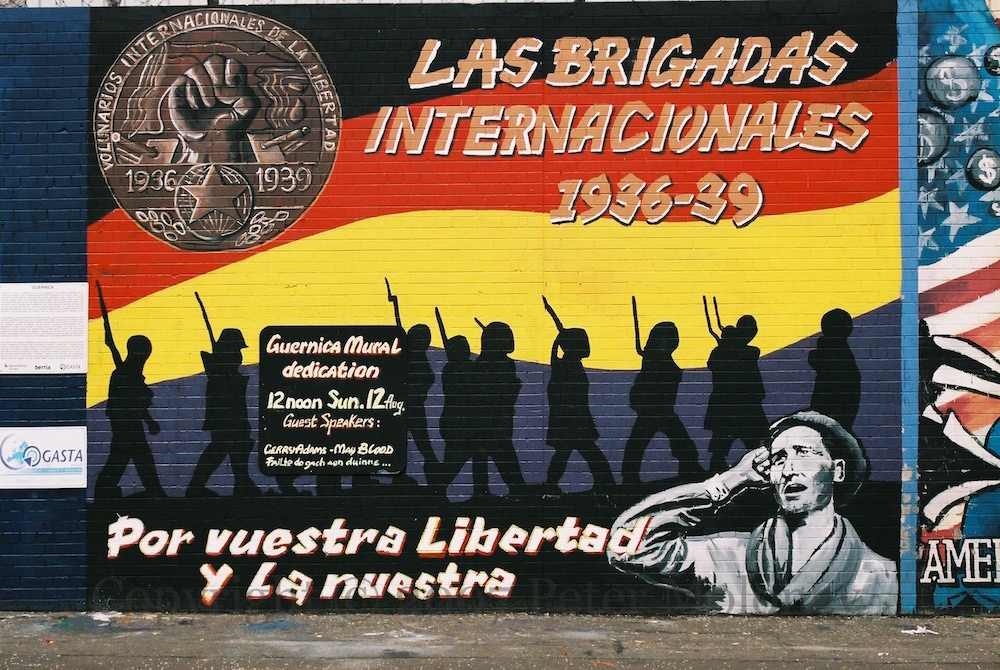 “Askatasuna! Not Spain, not France – self-determination for the Basque country”

Iraqnica – Picasso’s Guernica reproduced in red and grey as a protest at the invasion of Iraq.

“Free Palestine From 60 Years Of Nakba!” 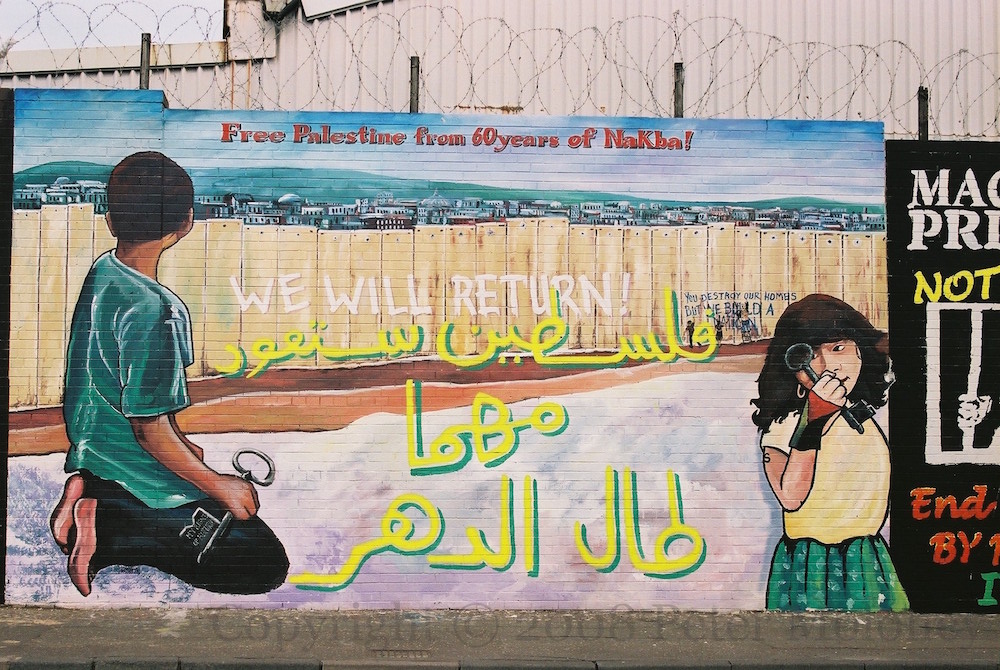 “Freedom for the Basque Country” – tarp outside An Cultúrlann, Falls Road, Belfast.

Palestine outside the Free Derry Museum

All Flags Are Welcome

Palestinian and Basque flags flying in Top Of The Hill, Derry.

Shame On You Israel

Not Spain, Not France – Catalonia

End The Blockade Of Gaza at the Top Of The Rock, Belfast