In 1969, 33 Lecky Road, the last house in the row and recently abandoned by a family of three generations of McKanes, had a gable wall overlooking a piece of vacant ground known then as Kitty Kane’s Corner (after the mother McKane from the previous generation). (Possibly also known as Fox’s Corner – Irish Central | Derry City | Derry Journal).

Here is an aerial image of the Bogside (taken from the Bloody Sunday Inquiry, as presented here). The view is looking northeast; the river Foyle is visible at the top, the walls of the old city run from top to bottom just to the right of centre, and the steep grassy slope that sweeps down to the Bogside is in the bottom centre.

(Details of the redevelopment. Moving clockwise from the left, from Free Derry Corner/the vacant ground: Lisfannon Park flats were built to the left (replacing the low even numbers of Lecky Road and Nelson and Wellington streets); Glenfada Park flats were built above Fahan Street; crossing Rossville St, Rossville flats replaced the cattle market; and St Joseph’s flats (the smaller flats below Rossville flats) were built where Fahan Street used to turn west. Fahan Street runs along the walls diagonally through the middle-right of the image above and then used to go directly north-west; in this image it wraps around the bottom of the flats in St Joseph’s Place before heading north-west (which appears as almost due west in the image above). The road that continues the southward direction of Fahan Street is St Columb’s Wells, parallel to Lecky Road.

Here is another image from the period, taken from the west. Free Derry Corner is in the middle of the picture:

The original, hand-written, January 5th, 1969, version of “You are now entering Free Derry” was done by Liam Hillen. Hillen tells the story like this:
“We were standing around there, it must have been two or three in the morning, heating ourselves up, and I said to Eamonn McCann, “Jesus, I am fed up standing around here doing nothing.”
And Eamonn turned around and said, “Why don’t you go and paint a sign on that gable wall over there?” I asked what we should we paint up, and guys made suggestions like “We Demand Free Beer” and various other things. Then McCann turned round and said, “Why don’t you stick up “You are now entering Free Derry”?” I said, “That’s it, we’ll stick that up,” and turned round and said, “Anybody know where I can get some paint and a brush?” And this wee fella standing on the right-hand side of me said his aunt lived up the street a bit.
So we went and found a can of yellow paint and a can of blue paint, anything else didn’t have much in it. I remembered that yellow and blue made green, so I mixed them together. I got this old hard brush and me and the wee boy walked back down to the corner and up to the gable wall. Big Danny Begley was about six foot tall so he leaned up against the wall with his hands interlocked and gave me a lift up. Chris Armstrong held the paint and I dipped into it.”
(Derry Journal) (Hillen died on Christmas Day, 2018 – Derry Journal.)
Free Derry Corner was born.
Slogan with oak leaf (obscured on left); without “Vote McCann” or “Hume for Derry”.

(Unattributed X09173)
Slogan with oak leaf on left, with “Vote McCann” above, and “Hume for Derry” on right.

(Image from Free Derry Museum, perhaps taken by Jim Davies X09171)
According to the Derry Journal, War And An Irish Town, and The Bogside Artists, the inspiration for the slogan was the U.S. civil rights movement and student protests at the University Of California, Berkeley. McCann states that he had seen footage of the protests, including a placard stating “You Are Now Entering Free Berkeley” (Derry Now). There do not appear to be any images on-line of the phrase in connection with the ‘Free Speech’ movement of the mid-60s or People’s Park in 1969.
(Another possible influence is “free” radio stations. On January 10th, at 7 pm, a transmitter that had been smuggled in from the Republic began broadcasting under the name “Radio Free Derry” (DigWithIt) with the words “This is the first free radio Derry has ever known …” “Free” in this context means “not state-controlled”, as was claimed for Radio Free Europe (begun in 1949) and Radio Free Asia (begun in 1951), both US-sponsored broadcasts to communist countries.)
(Culture Northern Ireland says the slogan is an imitation of signs at the East-West Berlin border, but does so without attribution or citation.)
Early History: First “Block” Lettering
John “Caker” Casey did the more professional version in August, ahead of a visit by UK Home Secretary James Callaghan on August 28th — black block letters on a whitewashed background.

(Unattributed X09174)
Here is a still taken from video of Callaghan’s visit, from the BBC documentary No Go (at 7m 26s). RTÉ also has video of Callaghan being applauded in the Bogside, at 9m 50s, and the crowd is then shown singing “We Shall Overcome”. (Casey died in 2000 – FindAGrave.)

“Care-Free Derry” with faded “traitor” above the slogan

The word “care” was then papered over by a poster reading “Strike Now! Against Internment”

To this poster more were added: above ‘Strike now’ were two posters “Here comes the judge, jury, executioner” and “Don’t let them take any more – man your barricade” and above the “RY” of “Derry” “Don’t fraternise with the working class” and “Workers’ control – not army control”; there were also “Workers’ unity with McCann” stencils. (Barbey’s image shows the slogan being repainted. X05283)

Here is a 1971 shot of the gable wall at street level. The graffiti on the wall has been painted over.

John Hume (fourth from left) sitting by a fire on the vacant ground, February 1972. Hume’s grandparents and their children (including Hume’s mother, Anne Doherty) lived in the row of houses on Lecky Road (YouTube). 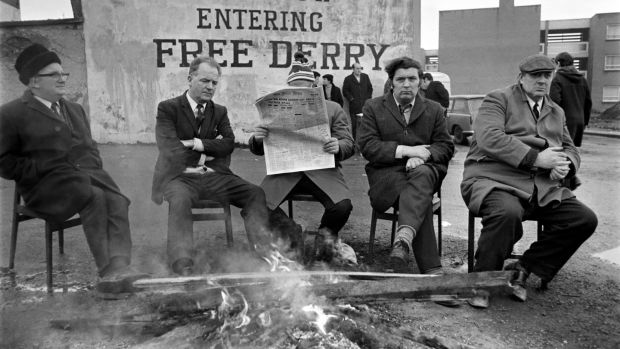 Here is a shot of the wall from (later?) 1972. The words “Free Derry” are now in white, on black squares, presumably in response to some damage or graffiti.

Early History: The Wall
The houses were demolished in 1975 but the gable wall was retained (Derry Journal: 1974 discussions | 1975 final decision) and repainted.

A Derry Journal article from 1976 reports a petition of 154 signatures claiming that the wall is unsafe.

An image from 1978 with the wall surrounded by fencing.

The fence was removed and the slogan re-painted in chunky lettering. (1979 Peter Marlow X05275 shows the repainting in progress.)

John Hume at the repainted FDC, with improvements to the ground around it.

Woods (Seeing Is Believing? p. 14) writes that “A member of the British army drove an armoured personnel carrier into the wall in 1982 taking off one side of it.” This (undated) image is perhaps of that event:

(The first painting of the other side of the wall was in 1983. There is a separate Visual History page for the rear of FDC.)

Early History: “Sans-serif” lettering
This 1986 image (below) shows the wall now with an apex and buttresses, and a flagpole.
(See Stones Speak 3m29s. It is not known who or what is responsible for the renovation of the wall – please get in touch if you know.)
A new, full-size slogan in sans-serif font is painted on the gable. The old maisonettes are still standing in the background.

Caker Casey in front of the sans-serif version of the slogan.

This version stood for a number of years though as we can see from these images it was often paint-bombed and then repainted on various occasions (1989 one, 1990 two, 1990 three).

Some time between 1990 and 1994 the slogan (in sans-serif lettering) was first “augmented” in the sense that other elements were added to the wall, either painted or attached.
In 1991, a board with the words “Johnny Walker” was added to the apex, for the return of the Birmingham 6 prisoner.

(Unattributed X09186 | Stones Speak 7m23s)
In 1994, around the time that The Petrol Bomber (the first mural by the Bogside Artists) and the 25th anniversary mural for the Battle of the Bogside were painted beside it, the gable was painted bright red and the slogan painted in yellow. According to Oona Woods in Seeing Is Believing (note to plate 14), the repaint was “A temporary transformation in 1994 by artist Colin Darke who painted the wall a socialist-related red and yellow to engender dialogue about its origins and current role in the community.” Darke’s press release is included on p. 16.

1997-01: 14 small flagpole holders were added to the rear for a black-flag commemoration of Bloody Sunday.

Early History: “Uneven-Y” lettering
The new lettering still has serifs but is thicker than previously (1998)
Here with a black ribbon (for Bloody Sunday):

(2004 M02135)
The chronological history of the wall will resume after we take a break to discuss the wall’s influence around the world.

Influence
The name (“Free Derry Corner”), the slogan (“You are now entering free Derry”), and the shape and colour-scheme of the wall have been imitated in various parts of the world.

The closest (geographically) might be “Freedom Corner” – the series of UDA murals in east Belfast. Freedom Corner comprises four (one-storey) gables and seven side-walls along the Newtownards Road; it went by “Freedom Corner” by 1994 (at the latest). It is not a corner (though the houses were originally built without the side walls) and so the “corner” in its name might have been inspired by Free Derry Corner.

The large gable at the bottom of Sandy Row (Belfast) bore the words “You are now entering Loyalist Sandy Row” with the same line-breaks – You/Are Now/Entering – as on FDC (M01519 | M02286).

The fame of FDC has spread beyond Northern Ireland, as the following images and links attest: 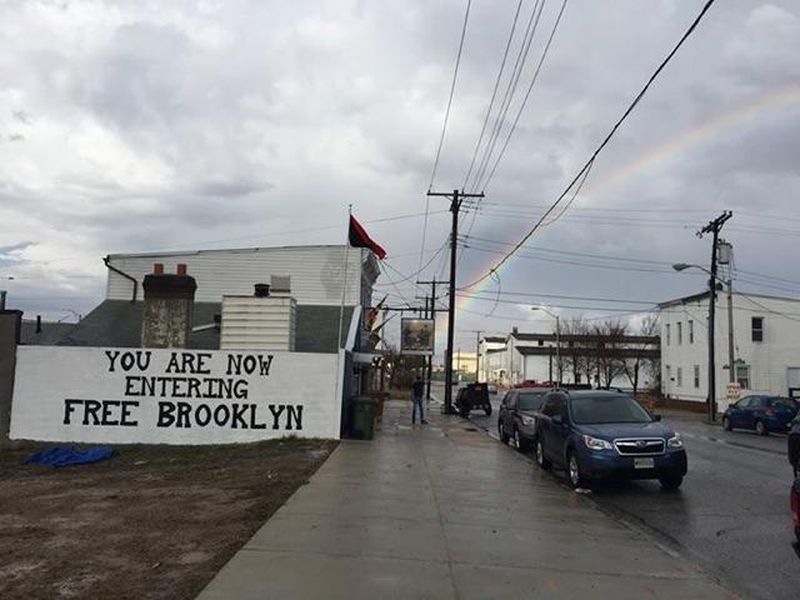 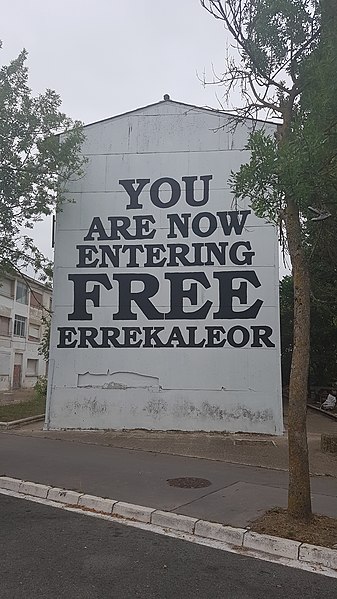 200x “Iraq – troops out. Vote McCann” graffiti (NWPressPics date given is 2000-03 but the lettering is normal appearance)

2007-01 with Toussaint l’Ouverture on right buttress, Mairéad Farrell on the left (as you look at the wall)

2018-10 Derry Girls Against Borders + Civil Rights For All